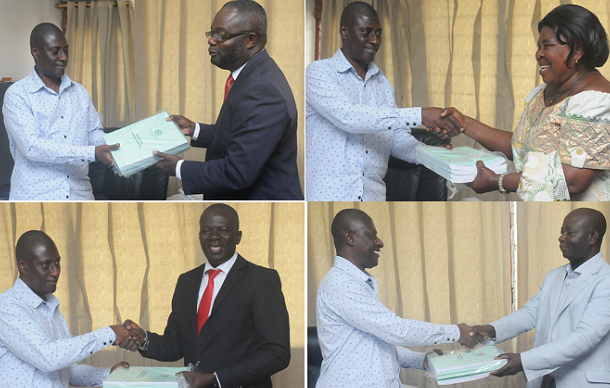 Presidential and parliamentary candidates are required to submit their completed forms to the EC by September 29 or 30, 2016.

Speaking to the Daily Graphic after issuing the forms to the aspirants, the Director of Electoral Services at the EC, Mr Samuel Tettey, said nomination forms for parliamentary aspirants had been sent to the various districts of the country, but since the Chairperson of the EC was the returning officer for the presidential polls, nomination forms for presidential aspirants were issued at the headquarters of the EC in Accra.

He urged aspirants, both presidential and parliamentary, to pick their forms early, so that in the event of any errors on them, the aspirants would have ample time to effect corrections to prevent any disqualification.

Mr Tettey said the EC had received complaints that the filing fees were high, saying a meeting would be held to discuss the issue but that until then the fees remained the same.

Meanwhile, there was drama in Mr Tettey’s office when Mr Odike was about to pick his nomination form.

As Mr Odike stood waiting to be received by Mr Tettey, suddenly another gentleman walked straight to Mr Odike and held him by the neck as though he wanted to strangle him.

The ensuing melee shifted focus from an interview being granted the media by the flag bearer of the GFP, Madam Donkor, as journalists were taken aback by the sudden attack on Mr Odike and riveted attention on the action.

It took the intervention of some members of Mr Odike’s party who had accompanied him to fend off the attack, following which the assailant left Mr Tettey’s office.

Background to the issue

The leadership of the UPP has been engulfed in a battle of supremacy with the purported dismissal of the Founder and Chairman, Mr Odike.

While the National Executive Committee (NEC) of the party, which has its headquarters in Kumasi, claimed it had sacked Odike as the party’s flag bearer and National Chairman, Mr Odike, for his part, said those claiming to have sacked him had no locus in the party.

Odike, a Kumasi-based business tycoon and Chief Executive Officer (CEO) of Odike Ventures, left the UFP that he had spearheaded in forming under similar circumstances of a supremacy struggle to form the UPP.

He contested the 2012 presidential election as the candidate of the UFP, but following a series of disagreements with the national executive of the party, he left to form the UPP in 2015.

However, the drama in the EC office was far from over, as it later turned out that the acting General Secretary of the UPP, Mr Gabriel Asamoah-Boakye, in the company of the assailant and another whose name was given as Ken Sekou, had gone to the EC office to pick the presidential nomination forms on behalf of the party.

That led to another scuffle between Mr Odike’s supporters and the two persons who had accompanied Mr Asamoah-Boakye, who maintained that Mr Odike had been sacked from the party and, therefore, he had no right to pick up nomination forms to contest the election on the ticket of the party.

It would have been a very messy situation but for the intervention of two policemen who had escorted Madam Donkor to the EC office.

The policemen succeeded in handcuffing Mr Asamoah-Boakye after he had sustained injuries.

According to him, the party had received a number of complaints of misconduct by Odike and, therefore, referred same to the disciplinary committee.

He said many letters and personal appeals to Mr Odike to appear before the committee and provide answers to those charges proved futile.

Because he never answered any of the calls that were made to him, the committee recommended that he should be expelled from the party, he said.

Mr Odike would not comment on the matter but said the two gentlemen were fraudsters who had attempted impersonating him and the party and that they should be taken to the police station for further action.

Asked by the Daily Graphic whether he had not been assigned security escorts, he answered in the affirmative and said his party had been assigned six policemen but he decided to go to the EC office without them because he had not anticipated the “unforeseen incident”.

Mr Tettey finally presented the nomination forms to Mr Odike, since, according to him, the EC had supervised the election that saw Mr Odike emerge as the flag bearer of the UPP.