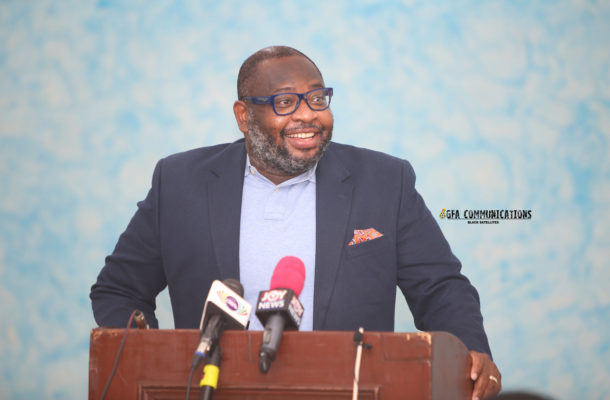 Executive Council member of the Ghana Football Association, Mr Randy Abbey has opened up with a betting issue he came across whiles he was the Management Committee Chairman of the Black Meteors.

He says the team went to play a friendly match in Iran and a member of the Ghana team brought a betting syndicate and paid the players some amounts of money.

The Chairman for Division One League side Kpando Hearts of Lions speaking in an interview on Accra based Asempa FM as monitored by Ghanaguardian.com narrated what happened in Iran but failed to mention the names of the perpetrator.

Below is the full transcription of his narration:

I had a personal experience with betting in Iran as the chairman of the Management Committee of the Black Meteors in the Islamic Republic of Iran.

They wanted to play a friendly match with the Black Stars but it was not a FIFA friendly day so we cannot arrange a team so the GFA asked the Black Meteors to go and replace them.

I was in my dressing room on the day of the match when the late Sir Cecil Jones Attuquayefio and Saban Quaye came to me that they wanted to speak to me.

It was about four hours to the game and they told me that Tua Chemis who used to play for Liberty Professionals who was roommates with Kwadwo Asamoah(formerly of Inter Milan,Juventus) had come to tell them that something has gone on in the match they are about to play.

They told me that the players were in their dressing room when one member of the Black Meteors technical team came to see them in the company of some foreigners who wanted a particular scoreline.

So they gave them $1,000 each and after the foreigners left the technical team member who was the middleman took $500 each out of every player's $1,000 to fix the match.

But there was one particular player who insisted that he will never share the $1,000, 50/50 with him since he was going to execute the job and took $600 and gave the middleman $400.

So after I was told this I told them to invite all the playing squad and the technical team except the middleman(technical team member)who came with the betting syndicate.

I spoke with them and they told me its true and they all returned the money.

After that I told them to call me that technical team member who came with the betting syndicate, when he came he wanted to sit down but I told him to stand.

I informed him that I'm aware of what he has done with the players and that I was struggling to get through on phone with the GFA President and Vice President but I have personally sacked him from the team.

So when we were going to play the match at the stadium we left this technical team member at the hotel but unfortunately the scoreline which the betting syndicate wanted came through as we lost 3-0.

When we arrived in Ghana I did not go home and headed straight to the GFA Secretariat where I met Kofi Nsiah the then General Secretary gave him my report, told him what had happen and also handed him the money as evidence.

It was during the era of Kwasi Nyantakyi so the EXCO met and a Committee was set up and they met all the players and the technical team.

The whistle blowers, that is the two players were applauded but the one who took $600 was punished and was never handed a Black Stars call up.

When the technical team member who was the middle man for the betting syndicate appeared before the committee he lied that they were agents he used to know whiles playing football and they came to give the players monies for shopping.

Meanwhile a day before we came to Ghana, he came and lied down on the floor of my hotel room to plead and in his words said it was the work of the devil.