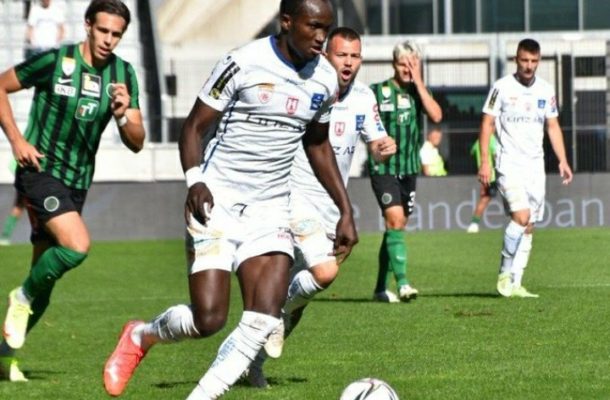 Ghanaian striker Raphael Dwamena has once again triumphed adversity as he has featured for his Austrian second tier side BW Linz against Wacker on Sunday 3rd October 2021 after a year out with a debilitating heart condition.

But the lanky Ghanaian striker never gave up on his dream to continue to play football despite all the comments about his documented heart trouble.

The Ghanaian was handed a rare start one year after last playing competitive football and was a thorn in the flesh of the Wacker Innsbruck backline.

Dwamena was instrumental in the only goal that was scored by his side which ended up as the winner in the game.

The Ghanaian struck a fierce shot which was parried by Wacker goalie Knaller before his teammate Aleksandar Kostic Kostic prodded home the rebound to make it 1-0 for the away side BW Linz.

Before that he drew a smart save from goalkeeper Knaller in the 6th minute with a fierce drive from inside the penalty box.

The Ghanaian striker thought he should have been awarded a penalty after he was upended in the penalty box after a run but the referee whistled for play to continue.

Dwamena last played competitive football for Danish Superliga side Velje on 18th, October 2020 but has made his come back from heart troubles as he is back to the game he loves.

Dwamena is on a contract at BW Linz until 2023, with an option for an additional year.

He has in the past played for clubs such as Red Bull Salzburg , FC Lustenau , FC Zurich , Levante and Real Zaragossa .