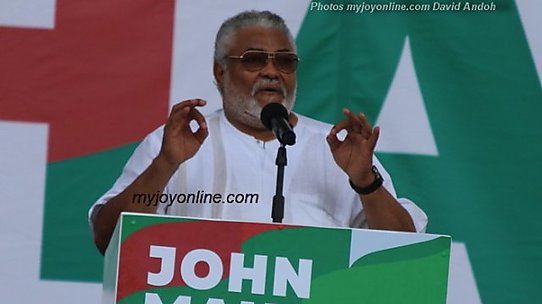 A political science lecturer at the University of Ghana says the presence of Mr John Rawlings at National Democratic Congress (NDC)’s campaign launch is an endorsement for President John Mahama's candidacey ahead of the crucial December 7 general elections.

Dr Evans Aggrey-Darko believes although there was no explicit endorsement of Mr Mahama’s candidacy at Sunday’s event by the Founder of the party, his presence alone speaks volumes.

“The appearance by the former president at his party’s campaign launch is significant and enough endorsement for the President and the ruling NDC government” he stressed.

In an uncharacteristically short speech at the official launch of the NDC’s campaign, Rawlings did not mention Mahama’s name nor did he encourage Ghanaians to vote for him and the party’s parliamentary candidates.

His failure to endorse the President has generated a lot of controversy with many, especially the opposition political parties, describing it as a vote of no confidence in President Mahama, who is seeking a second term.

Minister for Communications, Dr. Edward Omane-Boamah maintains President Mahama does not need the endorsement of Mr Rawlings to win the upcoming elections.

“For the former President to caution members of the National Democratic Congress (NDC) not to be complacent in the upcoming general elections, it shows he cares for the party” Dr. Aggrey-Darko said.

He told Afia Pokua that the former statesman finds himself in a tight corner as his wife leads the National Democratic Party (NDP), a breakaway faction of the NDC.