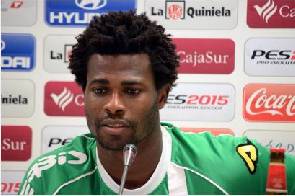 Ghana goalkeeper Razak Brimah has been nominated in an eight-man shortlist for the 2015/2016 LaLiga World Player- the best non-European player for the Spanish second-tier league.

Brimah made 36 league matches and two in the playoff for promotion against Girona.

Fans will vote until 21 October.

The winner will be announced at a gala for to be held in the Palacio de Congresos de Valencia on Monday, 24 October.