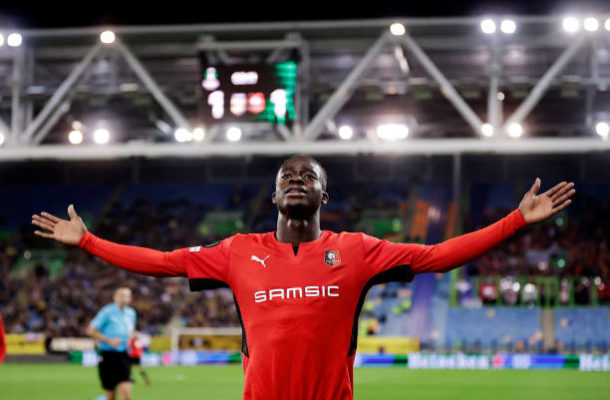 During his first few weeks in France, Kamaldeen Sulemana has left Ligue 1 Uber Eats defenders with their heads spinning.

His stunning goal at Stade Rennais FC's 3-0 win at FC Metz last Sunday was further proof of the teenager's talent.

After seven league starts, Sulemana has contributed four goals and the explosive Ghanaian winger showing no signs of slowing down.

"He brings a real freshness," coach Bruno Génésio told the Ligue 1 Show on beIN SPORTS. "Don't forget he's only 19. For a player who's just arrived he's had an amazing start to the season."

Rennes are being rewarded for the faith they showed in the summer, splashing 15m euros to bring the youngster to France from Danish side FC Nordsjaeland.

will be difficult to stop.les Rouge et NoirHis speed and trickery on the left flank are giving the team another dimension. When Belgium winger Jérémy Doku is fit again and playing on the opposite flank,

For now, though, Sulemana is doing the damage on his own.

"He's enthusiastic, carefree, and he's quick, very, very quick!" enthused Génésio. "He hurts teams. He's a kid who likes playing and we like watching him. It's nice to manage a player like him who is always smiling. He come to training to work but always with a smile."

Before scoring his first goal on the road, Sulemana had already netted on his Ligue 1 Uber Eats debut against RC Lens. He then struck two brilliant efforts in a 6-0 rout of Clermont Foot 63 in Round 7.

Aged just 19 seven months and eight days, he became the youngest Rennes player to register a double since Ousmane Dembélé in April 2016.

Before the international break, Sulemana ripped into the Paris Saint-Germain defence, and set up Gaëtan Laborde for the first goal in a 2-0 win. The most dangerous teenager in Ligue 1 Uber Eats right now, the future looks very bright indeed for Sulemana.