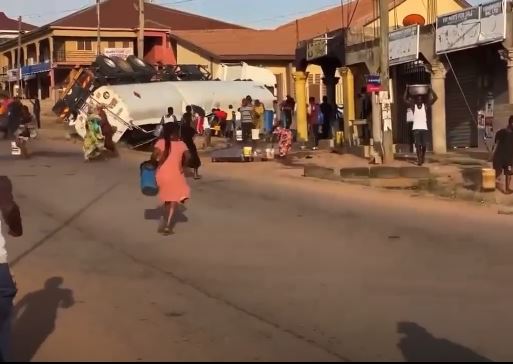 Some residents of Kaase, a suburb of Kumasi attempted to siphon fuel after a diesel tanker had overturned in the community on Sunday, May 1.

The tanker carrying fifty-four thousand litres of diesel, according to reports, was heading towards the Bulk Oil Storage and Transport Company [BOST] depot at Kaase when it fell off around 4 p.m. on the Kaase-Ahodwo road, near the Asokwa industrial area.

In a viral video available to GhanaWeb, the residents of the community were seen rushing to the accident scene with buckets and various containers for their share of the ‘free diesel’.

This caused a gridlock on that stretch as the emergency team avert a possible disaster.

Eyewitnesses had stated that the police and firefighters had a tough time controlling the residents as they ignored warnings to stay away from the accident spot.

The Ghana National Fire Service personnel managed to put the situation under control after calling for police enforcement before offloading the fuel into another tanker.

“Normally when there is an incident of this nature we always tell people to run away from the scene. But they rather came looking for something. What happened was that the tanker was initiating a curve and it didn’t get it right and fell,” ADO II Ebenezer Graham, personnel from the Asokwa fire sub-station told the media.

He added, “the main road had been blocked and the only alternative was this rough road and he didn’t get it right so the thing got down."