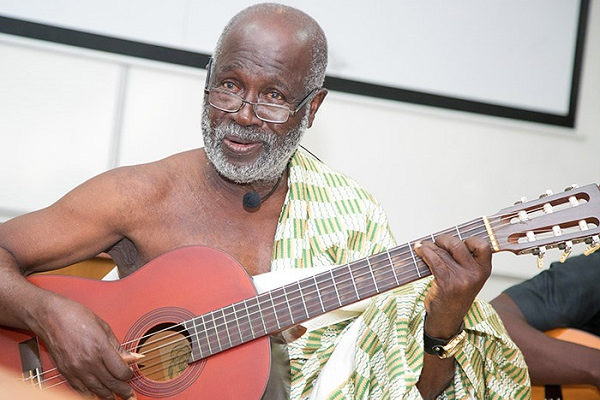 Speaking to Ultimate News’ Ivan Heathcote – Fumador on the sidelines of the maiden StoryFest event in Kumasi, the nonagenarian insisted “women are sacred and they have to be respected.”

“If you want to understand life, watch the life of a woman. It is taboo to hit your wife. If you do, it is like striking your own mother,” he advised.

Agya Koo Nimo who remarried after his first wife passed on, recounted how his life had been sustained by his wives with whom he has been blessed with fifteen children.

“I don’t know how to cook. It is these women who have fed me all my life. When you have a quarrel with your wife, one thing you should never do is to deprive her of upkeep money. If you refuse to eat her food, you have done yourself a great disservice,” he observed.

Advising the youth to stick to a wife and eschew promiscuity, Agya Koo insisted that monogamy was divine.

“I have been blessed with long life because I live by what my creator taught. He created just one woman for the first man. You young men should stop this Charley Charley life and marry one person and stick to her,” he cautioned.

The maiden festival of stories dabbed ‘StoryFest’ which came off in the Ashanti regional capital Kumasi brought indigenous African Storytelling to life with rich cultural performances, songs, poetry and dancing.

Project Leads, ‘In And Out The Circle,’ in collaboration with Ultimate 106.9 FM put up the best renditions of the stories behind the various cultures and dances of Ghanaian tribes.

The icing on the cake was the time parents and children enjoyed drawing attentively from the deep wisdom trough of the 90-year-old Agya Koo Nimo whose blending of stories and singing on the guitar drove patrons to a standing ovation.

Executive Director of In And Out The Circle’ Mrs. Marian Babah Alargi explained that the event was to revisit Ghana’s rich value-laden cultures of old through the art of storytelling.

She recounted, “Listening to Agya Koo Nimo today, he spoke about parenting, integrity, the new generation and sang a particular song that asked the mother ‘where is my father’. I think that song alone spoke so much and told parents that we can train our children together and that parenting is not outmoded because of evolving times.”

As Africans, we have a lot of good values and morals that we have let go and StoryFest is a Sankofa Project so people should watch out for more,” she assured.

Parents and children who filled the auditorium of the Christian Service University College could not bottle in their excitement as they sat through three hours of back to back indigenous Ghanaian Stories accompanied by cultural trooping and dances including Adowa, Kundum, Atsiagbekor, Sikyi and Kpanlogo.

In And Out The Circle (IOTC) Inc. is a positive family oriented social enterprise with its primary focus on nurturing and advancing the course of responsible parenting, healthy family cohesion and sound child upbringing.