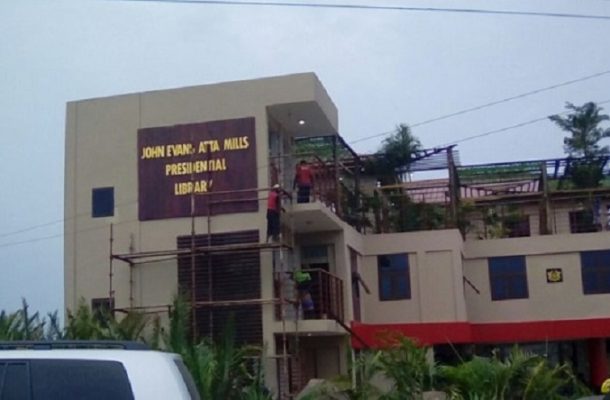 It is revealed the University of Cape Coast spends a minimum of Thousand Five Hundred Ghana Cedis (GHC1,500) every week in running the Atta Mill Library in Cape Coast.

According to authorities at UCC, the erstwhile NDC administration failed to honor its pledge of providing funds for the running of the Library in the Central Regional Capital.

The authorities affirmed the previous Government, refused to provide the needed funds  to ensure the smooth running of the facility especially, the research Center.

Former President John Mahama in July 2015 after the launch of the library, handed the project to the Faculty of Arts of the University of Cape Coast to turn it into a research Center focused on the works of the late President.

The library which has a 100 seater conference hall, a museum  and artifacts that talk about the life of the late professor,  as well as  offices was to be  turned into a research Center affiliated to the Faculty of Arts of the University of Cape Coast.

However, sources at the university  indicate non fulfillment of the said  pledges by the previous administration is now hampering the running of the place as the university to now burdened with maintaining the facility.


The university which already owes the Electricity Company of Ghana huge amounts in bills spends a minimum of Ghc300 daily to maintain the facility due to its electronic fitting.

The huge cost of power forced the university to switch off the electronic aspect of the library.

The contractor of the facility who could also not wait any longer for his fee in undertaking the construction of the facility finally delved a severe blow to the  facility by adding additional locks to the doors to prevent people from accessing the facility.