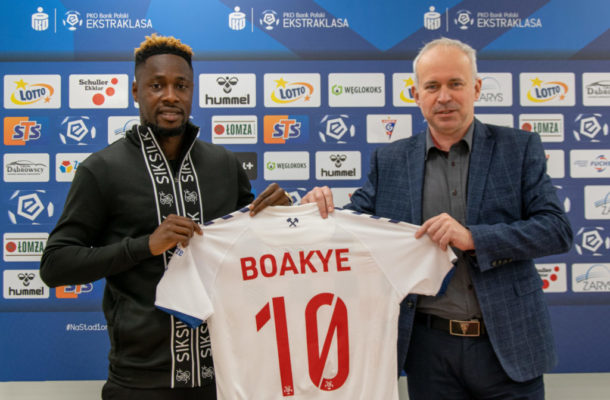 Ghanaian striker Richmond Boakye Yiadom has completed a move to Polish side Gornik Zabrze SA in the winter transfer window.

The former Red Star Belgrade striker has signed for the Polish side on a short term deal until the end of the season with an option to extend.

He joins Polish side Gornik Zabrze as a free agent after leaving Serbian side Red Star Belgrade after the expiration of his contract.

The 28 year old completed the formalities of his deal on Tuesday after passing his medical examination and agreeing personal terms.

Richmond Boakye Yiadom first joined the Serbian champions in 2017 on loan and scored an impressive 16 goals in 19 games in all competitions.

On 31 August 2018, Boakye signed a new 2.5-year contract with an optional one-year extension for Red Star in a €2.5 million transfer, just six months after the transfer to Jiangsu Suning.

Boakye contributed to Red Star's 2018-19 UEFA Champions League campaign, as the team qualified to the group stage for the first time after 27 years.

He made 104 appearances and scored 60 goals in all competitions for the Serbian giants.

The nomadic player has in the past played for Chinese side Jiangsu Sunning, Genoa, Elche, Juventus , Roda JC, Latina, Sassuolo among others

He has been capped 14 times by Ghana scoring six goals.