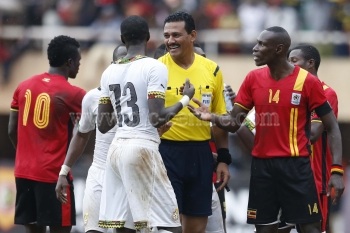 Sudanese referee El Fadhil Mohammed will come under FIFA scrutiny this week after twice booking Uganda's Nicholas Wadada without sending the defender off in their clash with Ghana in the 2018 World Cup qualifier.

Wadada was yellow-carded twice in Tamale but not sent off as the Cranes forced a shock 0-0 away draw with the Black Stars.

FIFA match officials will receive the match reports by Monday and will be asking referee Mohammed the questions as to why the right-back was not sent off the two offences.

The incident was perhaps the biggest moment of a game played on sedatives and is one of the talking points of this game after he had appeared to have been booked twice but not sent off.

Mohammed flashed a ghost card at the Vipers’ player in the 23rd minute before seemingly noting down the ‘booking’ in his notepad.

Uganda coach Micho quickly took off Wadada, who had been twice booked, and brought on Hassan Wasswa Mawanda at the hour mark.

Although right-back Wadada was cautioned in each half at the Tamale Sports Stadium in northern Ghana, the Sudanese referee did not flash the expected red card after the second booking.

The Ugandan battled against the pace of winger Frank Acheampong until substituted soon after his lucky escape, and both cautions were the result of illegal tackles from behind.

A Fifa website report of the opening group-phase match in Africa confirmed that Wadada was yellow-carded after 23 and 55 minutes.

Ghana are ranked 22 places above Uganda in the world and were expected to make a winning start as they seek to emulate African record-holders Cameroon and reach four consecutive World Cup tournaments.

Following a slow start in 35 degrees celsius (95 fahrenheit) heat, Ghana controlled possession and had the best chances to win the match in Group E, which includes Congo Brazzaville and Egypt.