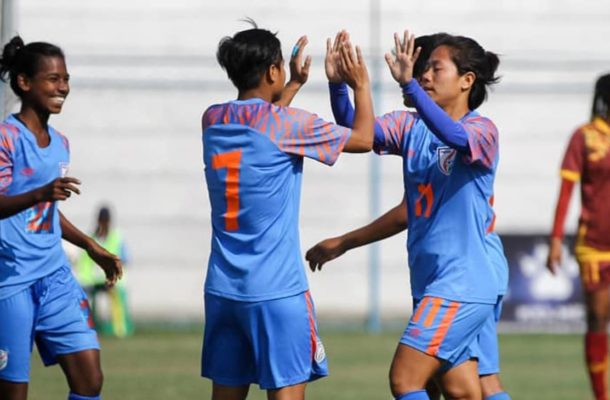 Kuala Lumpur: Four-time South Asian Football Federation (SAFF) Women’s Championship winners India will be aiming to take a step closer to defending their title when they face Bangladesh in the semi-finals of the 2019 edition on Wednesday.


Having cruised to top position in Group B with wins over Maldives (6-0) and Sri Lanka (5-0), India will be confident of their chances, especially as they have been firing on all cylinders in the regional competition being played in Biratnagar, Nepal.

Bangladesh’s progress to the semi-finals wasn’t as smooth, as they fell to 3-0 defeat to Nepal to finish second in Group A.

However, Bangladesh will be fired up for the semi-final as they look to avenge their 3-1 loss to India in the 2017 final.

The other semi-final will see hosts Nepal facing Sri Lanka.

Nepal have been as impressive as India, registering 3-0 wins over Bhutan and Bangladesh to signal their intent on lifting the title for the first time after having finished as runners-up on three occasions.

Manjali Kumari Yonjan has led Nepal’s surge with goals in both group matches and backed by partisan fans at the Sahid Rangasala Stadium, they will be confident of advancing to the final.

Sri Lanka, however, will be up to the challenge as they look to better their semi-finals finishes of 2012 and 2014, with Chalini Kumari, who struck both goals in the 2-0 win over Maldives, leading their charge.

Both matches will be played at the Sahid Rangasala Stadium in Biratnagar, before the final takes place on March 22.