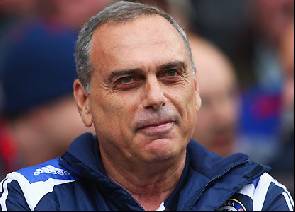 Johnson capped 45 times by Ghana, believes the former Chelsea manager has not done enough to bring competition to the team since he replaced Kwesi Appiah.

Grant has come under incessant pressure after the country's shaky start in the 2018 World Cup qualifiers.

The Black Stars were forced to a disappointing 0-0 draw against Uganda to pile more misery on the Israeli.

“I don’t know the kind of work he is doing. He always travels outside to Europe in the name on monitoring Ghanaian players but we always see the same faces,” he spoke to Hot FM.

“He must justify why he is being bad that huge sum of money. Kwesi Appiah would have been sacked a long time ago if he was getting this kind of results but we have chosen to maintain this coach.

Grant has strongly hinted he will not extend his contract with the West Africans when it expires in February next year.