Samsung launches iTest, which lets you test a Samsung phone from your iPhone 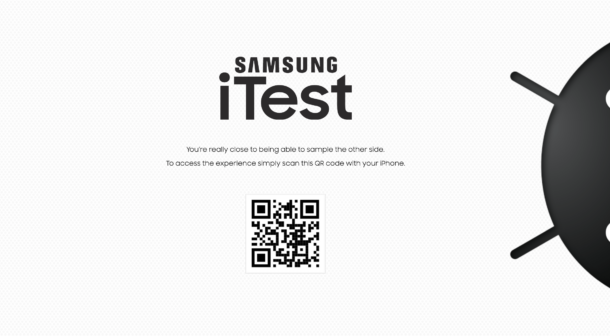 Talk about venturing into enemy territory. Samsung has released an app for the iPhone, of sorts, called iTest. And what it does is allows you to preview what life would be like using a Samsung handset, without actually going into a store and holding one of the South Korean company’s phones.


Basically, you can head to the iTest website using an iPhone. Once there, you scan a QR code that adds a web link to your Home screen. Select the link and you’re directed to a highly interactive website that looks like the OS for Samsung’s flagship handsets.

From here you can browse and flick around, to see if you might be tempted into making a change of software (and, by extension, hardware). Samsung’s software wizardry offers surprisingly deep simulations of what it’s like to use one of the company’s phones and we can see it being tempting to folks who aren’t completely buried in Tim Cook’s wonderfully-curated ecosystem. Everything from incoming messages to phone calls can be previewed, but it’s not quite as deep a dive as you’d get with a real phone. But it’s awfully convenient.

The test is currently being advertised in New Zealand, but the official website should work just fine for you if you’d like to give it a shot. If you’ve never used Samsung’s One UI before, it’s sure to be an interesting experience — even if you’re doing it on your iPhone. All phones are black rectangles from the front these days, anyway. Why not see how it feels to switch teams for a little while?