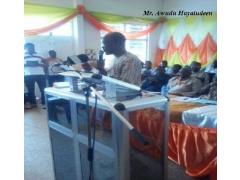 Mr. Awudu Hayatudeen, the General Manager of the Builsa Community Bank Limited (BOCO-Bank), has called on the public to seek advice from financial professionals before dealing with micro-finance institutions.

Speaking to the Ghana News Agency at Sandema in the Builsa District of the Upper East Region, Mr. Hayatudeen expressed regret about instances where majority of Ghanaians allowed themselves to be defrauded by some micro-finance institutions in the country.

The Manager who said his outfit would assist the Bank of Ghana (BOG), the regulating body, to weed out such micro finance institutions, adding that his outfit and other rural banks were working together in that regard.

“It is really pathetic that the situation has led to the collapse of many people's businesses and the breaking up of families. My outfit and other Rural and Community Banks will assist the BOG to weed out such defrauders.

He said BUCO –Bank was one of the credible banking institutions in the Upper East Region and had instituted both internal and external control measures to protect the purse of customers and called on the public to transact businesses with the bank.

Mr. Hayatudeen said from the modest beginning of one branch, the bank had grown to four branches located at Bolgatanga, Sandema and Fumbisi all in the Upper East Region and Yagba in the Mamprugu Maudori District of the Northern Region.

“As a Community Bank owned financial institution established in 1996, the Builsa Community Bank LTD is regulated by the BOG and also supervised by the ARB Apex Bank, has about 50,000 clients”, he stressed.

He said the Bank for the past 20 years in its operations had performed creditably and was also rated strong by the Efficiency Monitoring Unit of Apex Bank in 2015.

Another success chalked by the bank was that it is the only rural bank in the Upper East Region that met the mandatory minimum stated capital of GH¢500,000 for 2016.