Soldier nabbed for snatching GH¢23,000 from a civilian 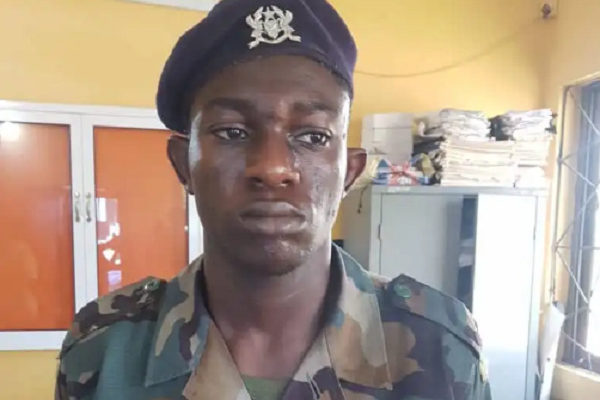 A soldier, Private Asare Boateng, is said to be in the custody of the Kwasimintim Police in Takoradi for forcefully taking an amount of GH¢23,000 from a civilian and bolting with it.

A report by Mynewsgh.com indicates that the soldier, a bandsman with the 1st Signal Regiment of the Ghana Armed Forces, met two civilians, Samuel Fyreson and Baba Musah, at Elmina in the Central Region.

The soldier commanded Samuel Fyreson to take off the camouflage patterned trousers he was wearing; however, Samuel fled out of fear, leaving behind a bag containing the said amount with Baba Musah.

Private Asare Boateng subsequently took the bag from Baba Musah with force and sped off in a Mitsubishi Pajaro vehicle with registration number AC- 8957 -20.

The incident was reported to one Samuel Arthur Junior, who had sent Baba Musah and Samuel Fyreson to deposit the money in his GCB Bank account.

Samuel Arthur, upon hearing about the incident, hired a taxi with which he chased after Private Boateng.

The Mitsubishi car was tailed to Takoradi, where Samuel Arthur Junior called for military police assistance in retrieving his money from Private Asare.

A group of military police officers subsequently chased after the suspect and arrested him at Paa Grant Roundabout in Takoradi.

The suspect, upon interrogation, said he was a soldier stationed at the office of the Senior Minister at the Jubilee House.

A total amount of GH¢10,000 was retrieved from the suspect, who maintained that it was the exact amount in the bag he seized from Baba Musah.

He later confessed that he was not a soldier but a bandsman at the 1st Regiment in Accra.