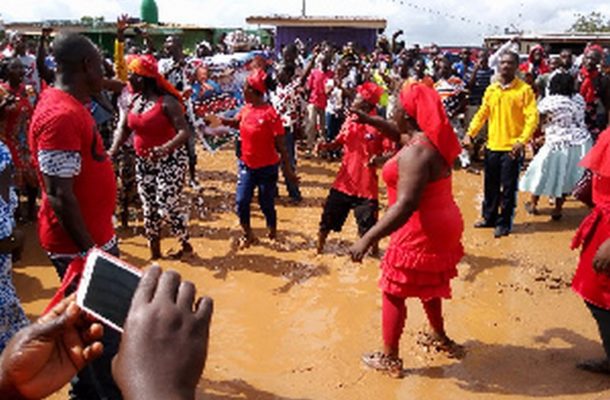 Angry residents of Somanya in the Eastern Region on Monday, 22 November 2022, demonstrated to register their displeasure at the government over humongous electricity bills from the Electricity Company of Ghana (ECG).

Scores of aggrieved customers of ECG were clad in red and marched with placards, some of which read: “We don’t want you ECG,” “We want VRA,” “Freedom from ECG,” “We will not pay bills,” “ECG move from Krobo lands.”

The residents, with the protection of personnel from the Ghana Police Service, marched through some principal streets in the Manya Krobo district to Kpong junction in the Yilo Krobo area, thereby bringing commercial activities in the area to a halt.

They later presented a petition to the management of the Volta River Authority (VRA), urging them to take over the operations of ECG in the area.

According to the demonstrators, their major problem was the issue of over-billing on the part of ECG.

They said the bills are high, irrespective of their consumption patterns.

The residents said the introduction of the prepaid meters by ECG in the area has not helped the situation, adding that the majority of the people in the area are subsistence farmers who cannot afford such bills.

“These people here are not salaried workers who can afford the levels of bills churned out by ECG in the area,” they emphasized.

The demonstrators were also unhappy about being enrolled onto ECG platforms instead of VRA’s since VRA operates on Krobo lands.

“Why should we have VRA operating on Krobo lands for us to be enrolled on ECG platforms for us to be paying huge bills?” they quizzed.

Speaking on Accra1 00.5FM, hosted by Kwame Appiah Kubi, leaders of the United Krobo Foundation, a pressure group that organised the demonstration, said since 2014, the management of ECG has not been fair to Krobo residents.

“ECG could bill residents as much as GHS10,000 at the end of the month, others who are petty traders, seamstresses are billed GHS5,000,” they lamented.