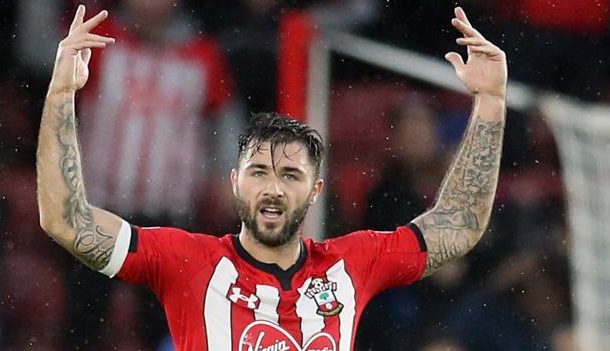 Southampton manager Ralph Hasenhuttl apologised to Arsenal counterpart Unai Emery after forgetting to shake hands amid the emotion of a late victory on his home debut.
The Saints ended Arsenal's 22-match unbeaten run and won their first home league game since April thanks to Charlie Austin's 85th-minute header with Hasenhuttl running on to the pitch to celebrate with his players on the final whistle.
"I had to run to my guys because they were waiting. I shook hands later and it was OK," said Hasenhuttl.

"It's what I wanted to feel when I came to the Premier League, this atmosphere after the game, and to celebrate such a moment is something very special for me."
In a see-sawing encounter, the hosts took the lead after 20 minutes as Danny Ings muscled home a header from Matt Targett's cross.
Henrikh Mkhitaryan nodded in shortly after for Arsenal, following good work by Alex Iwobi and Nacho Monreal - but Ings struck again just before the break.
Nathan Redmond's floated cross was precise and Ings cushioned a looping effort into the far corner.
Arsenal turned the screw in the second half and restored parity as Mkhitaryan's shot deflected in off Jannik Vestergaard.
The Gunners had their chances with Alex McCarthy impressing in the home goal, but Southampton were dangerous on the break and Shane Long had a goal rightly ruled offside before providing a teasing cross for Austin's winner.
The victory takes Southampton out of the relegation zone and up to 17th.
At the final whistle, Austrian Hasenhuttl - nicknamed the 'Klopp of the Alps' during his spell at previous club RB Leipzig - joined his players' on-pitch huddle before whipping up more decibels from the home support.
With rivals Chelsea winning away at Brighton, Arsenal are now three points adrift of the top four.
Hasenhuttl provides cheers with the beers


Ralph Hasenhuttl joins his players at the final whistleEarlier in the week, Hasenhuttl had sent free drinks vouchers to Southampton's season ticket-holders to mark his first game at St Mary's. His accompanying letter promised an "intensive and very hard-working" environment and his players responded by trumping Arsenal's quality with industry and tenacity.
Ings, whose last headed Premier League goal was for Liverpool in Brendan Rodgers' final match in charge back in October 2015, looked a potent aerial threat, finding space in between Arsenal's three-man defence to score his two goals.
Also heartening for a team at the wrong end of the table, the Saints defence was galvanised.
Jan Bednarek typified their whole-hearted commitment, sliding in to steal the ball as Pierre Emerick Aubameyang was poised to put Arsenal ahead in the first half.
Hasenhuttl lived every moment on the touchline, visibly reminding himself to stay off the pitch as he celebrated Ings' first, before ultimately giving way to his emotion at the final whistle.
"I heard when it works like this you have to do it every game at home," he said afterwards of his free drinks for the home fans. "We'll have a look."
Arsenal's patchy defence comes up short


Arsenal's last defeat was a 3-2 reverse against Chelsea on 18 AugustFor all the improvements made by Arsenal under Unai Emery, they have an unwelcome habit of making sluggish starts.
They are yet to lead at half-time in a Premier League match this season and finally, against a revved-up Southampton, they found they had left themselves with too much to do.
Emery's initial solution to his defensive shortages may not have helped.
With Rob Holding and Konstantinos Mavropanos injured and Sokratis Papastathopoulos and Shkodran Mustafi suspended, Emery opted for a makeshift back three of the recently-returned Laurent Koscielny, midfield specialist Granit Xhaka and 34-year-old Stephan Lichtsteiner.
An enforced change of tactics - with the injured Hector Bellerin replaced by Alexandre Lacazette as the Gunners reverted to a back four - gave them them more impetus after the interval.
Arsenal immediately looked more dangerous with Aubameyang's goal-bound shot cleared by Vestergaard before Lacazette picked the pocket of Oriel Romeu to set up Mkhitaryan's shooting position for the second.
They forced Southampton deep, but not beyond breaking point, and, when goalkeeper Bernd Leno misjudged Long's teasing cross, their unbeaten run - which had stretched back to August - was over.
Man of the match - Jan Bednarek


Bednarek - signed from Lech Poznan in July 2017 for a reported £5m - made seven clearances and four interceptions, both team-high totals'Very intensive' - what they said
Southampton manager Ralph Hasenhuttl: "It's amazing what the team can do in a week. It was very intensive, we had time to work on the basics and built the fundamentals for our game.
"I'm very proud of how focused and uncompromising they were, and when they had the chances, how merciless they were.
"It was a fantastic atmosphere and a special feeling here to win the match."
Arsenal manager Unai Emery: "We could have lost at any time and it was today.
"If we won't win like today, we cannot be in the top four.
"After 22 matches unbeaten we didn't lose and we are only fifth position in the table and the reason is because other teams are very well.
"Other teams usually they are winning but we need to do our way and continue to build. The objective is therefore top but we know it's not easy because the other teams are at a high level.
"We need to be very, very demanding."

Southampton picked up their first win in all competitions since beating Crystal Palace in September, ending a streak of 14 games without a victory.
Arsenal have lost their first competitive match since August versus Chelsea, ending a run of 22 games without defeat.
Southampton are the first team to score three headed goals in a Premier League game since West Brom did so versus Swansea in December 2016.
Arsenal haven't led at half-time in any of their 17 Premier League games so far this season. The Gunners have scored a league-high 27 second half goals in 2018-19.
Southampton's Danny Ings scored two headed goals in an English league game for the first time in his career. They were also Southampton's first two headed goals in the competition this season.
Southampton's Charlie Austin has scored in all five of his Premier League games against Arsenal - only Raheem Sterling versus Bournemouth (6 games) has a better 100% record of scoring against a specific opponent in Premier League history.
Henrikh Mkhitaryan has scored more Premier League goals for Arsenal in 25 games (six) than he did for Man Utd in 39 appearances (five goals).

What's next
Saints play Huddersfield away next Saturday at 15:00 GMT while Arsenal have a north London derby against Tottenham on Wednesday in the League Cup quarter-finals.
The Gunners take on Burnley in Saturday's lunchtime kick-off in their next Premier League game.