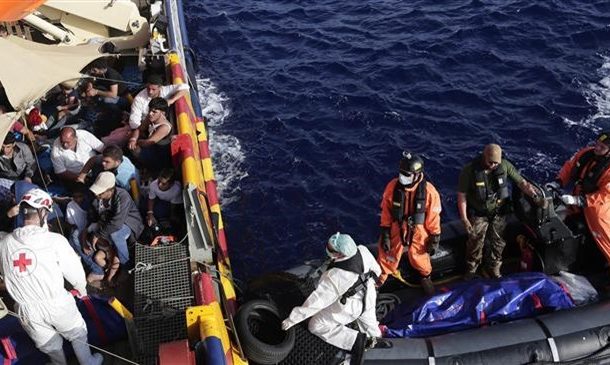 A Spanish aid group has rescued a number of "greener pastures-seeking" refugees from Ghana who were in a life threatening attempt to reach Europe via the Mediterranean Sea.

The rescue group saved about 277 refugees including Ghanaians who were attempting the dangerous mission.

Proactiva Open Arms said on Saturday that its staff had rescued the refugees from two unseaworthy dinghies and one wooden fishing boat off the coast of Libya, 30 kilometers (18 miles) to north of the city of Sabratah.

The Spain-based non-governmental humanitarian organization said at least one body was recovered during the rescue operation.

Maoulit, 19, from Somalia had died of tuberculosis during the journey, according to the NGO, which cited his family members traveling with him.

The Barcelonan institution said it had transferred the refugees — who were from Ghana,Libya, Somalia, Bangladesh and other countries to an Italian navy ship which was to take them to Sicily.

The International Organization for Migrants (IOM) says around 100,000 asylum-seekers have reached Italy by boat so far this year, many of them setting sail from Libya.

About 3,000 men, women and children have lost their lives over the same period due to the perils of the journey, according to reports.

In a new effort to curb the flow of the refugees, the Italian government and the IOM last month launched an anti-migration media campaign to warn refugees about the risks of traveling to Europe.

The "Aware Migrants" campaign, launched on July 28 simultaneously on the internet, television channels, radio and social media, aims to dissuade refugees from heading to the European continent.

The campaign, which costs 1.5 million euros ($1.7 million), features refugees recounting their sufferings at the hands of ruthless human traffickers, or the pains and dangers they suffered before, during and after crossing the Mediterranean Sea.

Since 2014, more than 10,000 refugees have died or are feared to have drowned while attempting to get across the Mediterranean Sea to reach Europe, according to the United Nations High Commissioner for Refugees (UNHCR).

Many blame the West for sparking the conflicts and tensions in the Middle East and North Africa that have been forcing millions of refugees to flee to Europe in hope of finding a better life.