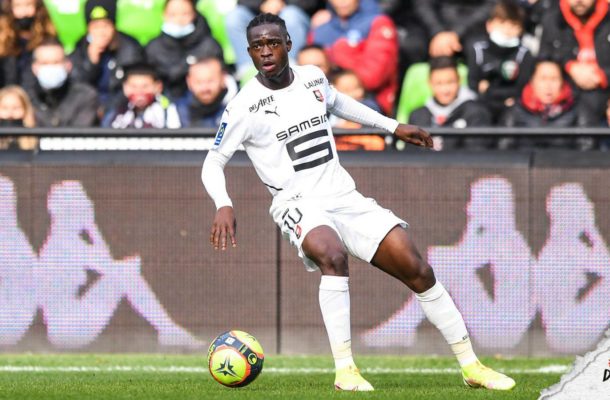 Stade Rennes coach Bruno Genesio has urged the Ghana winger to vary his game in his quest to reach the top level.

The 19-year-old, who joined The Red and Blacks in July, has been in impressive form for his new club in the French Ligue 1, having netted four times in 10 appearances so far.

On Sunday, he made headlines one more time with a remarkable goal against Metz.

“We took the time to mature him because he came from a different championship to ours, with much more intense training than what he used to do in Denmark,” Genesio said.

“Today, he assumes and assimilates better and better with the training load, and to express in a match all his qualities of speed, technique and efficiency for which he was recruited.

“Obviously now it will be more expected. I talk to him almost every day, he's someone who likes contact, needs it, and because he's a young player who still needs advice, and listens to those who can give it.

“I'm happy because he's a boy who wants to progress, to learn. He may have to find other weapons than one-on-ones or duels. I know he is capable of doing it.”

Kamaldeen has also registered a goal for Rennes in the Europa Conference League.

The teenager joined the club in a five-year deal in July after being linked with famous teams across Europe.

“I chose Rennes because when I came for the visit, I spoke to coach [Bruno Genesio] and I spoke to [technical director] Florian [Maurice] and the project was very interesting and was good for me, and I felt here was the right place for me,” the winger said after his move in July.

“With Rennes, I get to play in Ligue 1 which is one of the best leagues in the whole world, so that’s enough of my reason.

“And I think I chose here based on my playing time and I think there’s a better chance of me playing more here than any other place, and I’ll play against great teams here as well.”

Kamaldeen, who was in first half action for Rennes in Conference League action against Slovenian side Mura on Thursday, will look to continue his fine form against Strasbourg in Ligue 1 on Sunday.