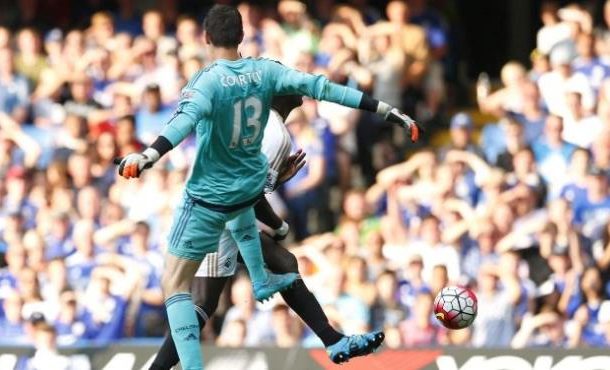 Thibaut Courtois was the man who convinced Chelsea to sell Petr Cech. The young Belgian was billed as one of the best goalkeepers in the world when he returned from a three-year loan at Atletico Madrid in 2014 and promptly won a Premier League title back in London.

But Courtois seems to have been in steady decline since.

The Belgian struggled early last season and was then ruled out with a knee injury for several months. Even when he returned to action he couldn't quite rediscover his form of old and now he is propping up the Premier League when it comes to his 'save percentage'

Compared to first choice goalkeepers at the other 19 clubs, Courtois is the worst in terms of shots saved in relation to shots faced, figures published by the â€‹Daily Mail have revealed.

The 24-year-old has only saved 47.1% of the attempts on his goal. That makes him the only goalkeeper who has saved fewer than half of the shots he's faced this season.

At the opposite end of the spectrum, Manchester City's Claudio Bravo and Tottenham's Hugo Lloris lead the Premier League with save percentages of 77.8% each.

Burnley goalkeeper Tom Heaton, who leads the league in overall number of saves, is close behind on 76.5%, while Ben Foster at West Brom has saved exactly three quarters of all the shots he's had to face so far.

Premier League champion Kasper Schmeichel has saved 72.7% of the shots he's faced and Cech, now of course at Arsenal, has saved 70.8%. Manchester United's David de Gea features in the bottom half with a surprisingly low 65% save rate