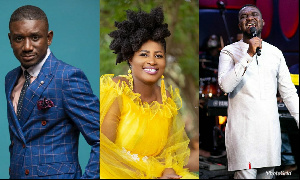 Gospel musician Noble Nketsiah has asked the public to stop hurling insults at his colleague Patience Nyarko for speaking her mind.

Noble Nketsiah who was making his submission on 3FM’s Showbiz927, noted that people could have shared their views about Patience Nyarko’s comment on Joe Mettle without the verbal abuse.

“It’s wrong to chastise her for whatever she says….but I also think that the radio or the public is not the place for her to spill her issues.” He stated.

Few days ago, Patience Nyarko lost her cool during a discussion on Onua FM, when a UK-based Ghanaian event organizer made claims that Ghanaian gospel music doesn’t go beyond the shores of Ghana.

DJ Alordia of Alordia Promotions had argued that language has always been a big barrier and as a result, anytime he organized an event with Ghanaian gospel musicians as performers, he struggled to break even. He went ahead to say that apart from Joe Mettle, there is no Gospel musician whose song has gone international.

This statement infuriated Patience Nyarko who blurted out that Joe Mettle only did Pentecostal songs and there was nothing special about him.

Reacting to this, Noble Nketsiah who was upset about the insults Patience Nyarko was receiving pleaded with Ghanaians to cut her some slack as she is entitled to her opinion.