Over subscription of 5th Eurobond evidence of investors’ confidence – Mahama 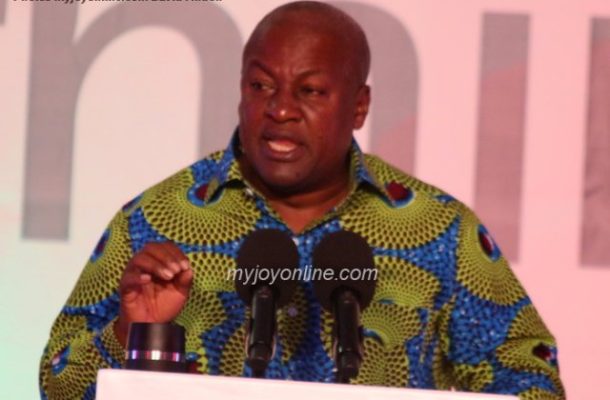 President John Mahama has expressed optimism in Ghana’s economy despite claims by the opposition to the contrary.

He said the oversubscription of government’s 5th Eurobond issued on the London market last week is an evidence of investors’ confidence in Ghana’s economy.

Government, he said has anticipated raising $1 billion but in the end, got $750 million with the bond oversubscribed by $4 billion.

“That is a sign of confidence in the economy contrary to what somebody will want us to believe,” he said.

President Mahama made these remarks when he delivered highlights of the 2016 manifesto of the governing National Democratic Congress (NDC) at the State Banquet Hall in Accra.

The 2016 Vice-Presidential Candidate of the New Patriotic Party (NPP), Dr Mahamudu Bawumia, has described Ghana’s economy as everything but strong.

At a public lecture held at the National Theatre last week, the economist said the economy is on a downward trend due to the “mismanagement and recklessness” of President Mahama.

He said the near eight years of the NDC government has added GH¢105 billion debts to Ghana’s public debt stock which stood at GH¢9.5 billion from independence to 2008.

This, the former deputy Governor of Bank of Ghana (BoG) said has created the situation where the NDC government is spending more on interest payment instead of capital expenditure.

Even though he admitted the economy has “faced serious challenges” especially on the microeconomic front, President Mahama said things are improving.

He explained economic management has more to do with structures put in place to sustain the GDP figures than the short term gains. Government is committed to that end.

“Inflation is on a downward trend – our expectation is that by next year we should go into single digit,” he said.

He was confident with the “institutional and structural reforms” government is putting in place the economy will become sustainable.