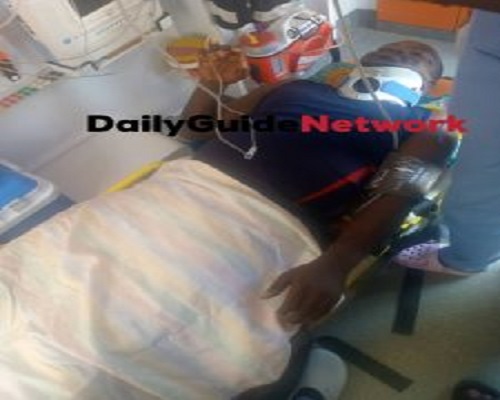 Chief of Kwahu-Pitiko in the Kwahu Afram Plains South District of the Eastern Region,  Nana Frimpong Akoamire, has been attacked in his residence.

According to a report by Daily Guide, the thugs numbering about 30 and wielding dangerous weapons attacked the chief in a rambo style and beat him to a pulp.

It’s unclear what led to the incident but it believed the thugs were in connection with the chieftaincy dispute surrounding the rightful heir to the stool.

According to reports, the thugs armed with guns, sticks, machetes, and other offensive weapons allegedly invaded the house of the chief last Friday night around 9pm when the Chief was seated in the house having discussions with his sister and the Queen-mother for the area.

The thugs allegedly dragged the Chief who was wearing a short dress on the floor, paraded him through the town to Adomasua where they put him on a motorbike to Tease.

The chief narrating the incident said he was in the house with the queen mother and his sister when they suddenly invaded his house and started smashing his car parked in front of the house.

According to him, “the thugs were fully armed with machetes, knives, and pistols so I decided to take cover into the room but two of the men wielding pistol stopped me and started beating and slapping me with the machetes and even seized my phone”.

Nana Frimpong Akoamire explained that “They dragged and paraded me to my Krontihene at Tease who confirmed sanctioning the action of the thugs. He asked why I’m parading as Chief. He ordered them to bring me to the police station and he took the lead together with his accomplices.”

The Chief of Kwahu-Pitiko indicated that “At the police station, he confirmed that he admitted the act, but the police allowed him and his boys to go freely after taking my phone from them and left me on the floor and told me to get up and go to the hospital since I requested for medical form myself”.

The injured Chief was later sent to a clinic and was referred to Atibie Government Hospital where he has been treated and discharged.

Thereafter he was given a police escort on Thursday, April 15, 2021, by Abetifi Police Command to return to Tease Police station to write his statement to Police.

Meanwhile, after the incident, the Police on Saturday stormed the area to arrest some of the suspects but they were later granted bail.

The District Chief Executive for Afram Plains South, George Ofori has been accused of supporting the Krontihene to perpetuate the atrocities, of which the Krontihene is said to be moving around in town with the vehicle of the DCE.

However, the DCE when contacted at press time on Sunday declined to comment on the matter.