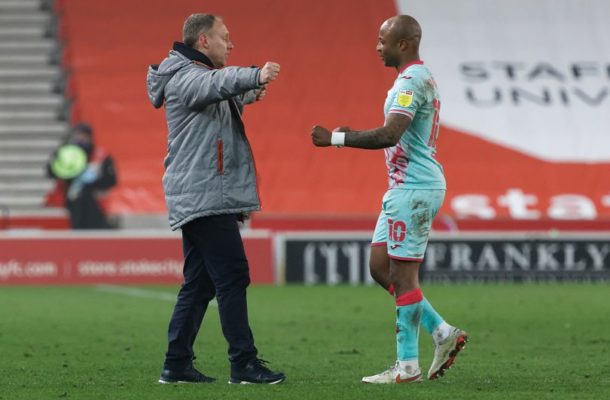 Swansea boss Steve Cooper admits he does not know how long his side will be without star man Andre Ayew for as they chase promotion to the Premier League.

The Ghana striker limped out of the 2-2 draw with bottom-of-the-table Wycombe at the Liberty Stadium with a hamstring injury and is set to miss Tuesday night’s home game with QPR.


“I don’t want to speculate really until it settles down. We’ll scan it and find out the extent of the injury,” said Cooper.

“You can’t walk off after eight or so minutes and then play a few days later unless there’s something extraordinary. It will be 24 or 48 hours before we know the extent of the injury.”

Third-place Swansea found themselves 2-0 down six minutes into the second half and facing a calamitous defeat before mounting a late charge with Jamal Lowe’s penalty and substitute Liam Cullen’s goal to take a point.
With second-place Watford losing 1-0 at Luton it meant they closed the gap on second place, and an automatic promotion spot, to six points. They meet Watford at Vicarage Road on the final day of the season.

“It’s a missed opportunity. We wanted to win and take all three points, especially after playing so well in the last two games,” said Cooper.

“We didn’t play well enough in the first half and we tried to sort that our at half-time. Then we gave away two soft goals at the start of the second half."he added.