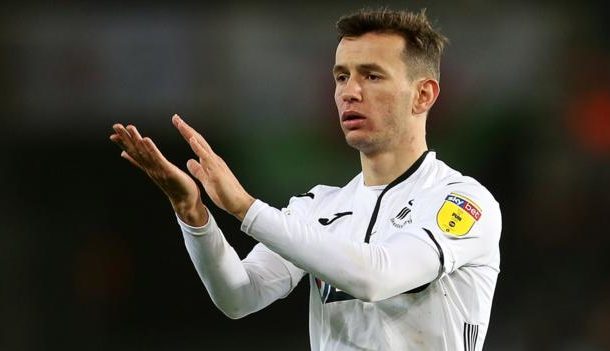 Bersant Celina came off the bench to score one goal and create another as Swansea City fought back in dramatic fashion to beat Sheffield Wednesday.
Swansea trailed after substitute Marco Matias seized on sloppy defending.
But five minutes after his introduction, Celina equalised with a neat, first-time effort.

And just a minute later, Celina lofted a delightful pass to Wayne Routledge, who scampered clear to finish between goalkeeper Cameron Dawson's legs.
The goal capped a thrilling few minutes and gave Swansea a second successive win to lift them to ninth in the Championship table, four points adrift of the play-off places.
Wednesday, however, slip down to 18th and a seventh defeat from 10 matches will increase the pressure on their manager Jos Luhukay.

Saturday's EFL action as it happened

Owls supporters demanded his sacking after last weekend's draw at home to Rotherham, and those calls intensified from the travelling fans at the Liberty Stadium following Routledge's winner.
Their frustration was clear after watching their side come close to snatching an improbable victory, though Swansea were worthy winners.
Graham Potter's side controlled the encounter, defying torrential rain and howling winds to create several chances.
Their intricate passing created two particularly promising early openings for Routledge, but the winger pulled one effort wide and tamely rolled another straight at Dawson.
Wednesday were starved of possession for long periods but, on the rare occasions they had it, they looked short of confidence.
They at least offered a fleeting threat - Lucas Joao dragging a low shot wide - but they spent much of the game defending.
Wednesday were organised and disciplined in that respect - unlike Swansea, with a mix-up among their defenders allowing Matias to put the visitors ahead with a powerful strike.
That came against the run of play and sparked joyous celebrations in the away end, but that soon turned to despair once again as Celina came on to turn the game on its head with his inspired late appearance.
Swansea City manager Graham Potter said:
"It's fantastic for the players and the supporters. It was a pretty awful afternoon in terms of weather. The support was great for us. They stuck with us and helped us.
"Overall, in that type of afternoon there's going to be a couple of mistakes. Maybe there was a little bit of that in the first goal and it got nervy for a few minutes but I thought overall we deserved the victory.
"It was great for Bersant [Celina] to come on and score and turn the game around for us. As a team, it shows there's a mentality to recover from setbacks, recover from mistakes.
"In the end, I'm really proud of the players' effort, togetherness and character, and also really proud of the supporters because it was an awful day but they were fantastic."
Sheffield Wednesday manager Jos Luhukay said:
"It's very hard to take, it is totally frustrating to give away a 1-0 lead in a couple of minutes.
"We didn't defend down our left side twice and that is not acceptable, you have to run with your opponent, I have tried to coach this three or four times but it is not going in their heads.
"I am so angry because the players are showing no proof of what we are doing. It is not the first time we give a 1-0 lead away for the opponents to score two goals.
"My words won't come out properly because I am so angry with what happened. Maybe the players can give the answers."
Asked about his future and fans calling for him to be sacked, Luhukay said: "I have answered the question on my future 20 times in recent weeks and I'm still here."