Swansea City salutes Andre Ayew for his time with the club 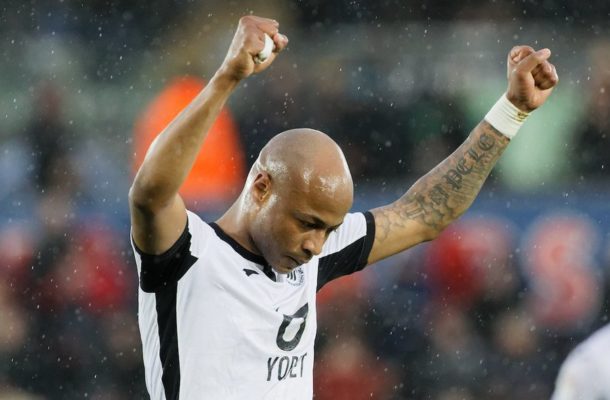 Swansea City AFC have thanked their soon to be ex-player Andre Dede Ayew for his service to the club over two stints at the club.

The Ghana captain will leave the Welsh club at the end of the month when his contract with the Swans is due to expire.

As Swansea's highest earner, their inability to gain promotion to the Premier League meant that, Ayew and the Welsh club had to end their relationship.

The 31-year-old scored 35 goals in 106 appearances since rejoining Swansea from West Ham for an initial £18m in January 2018.

Ayew originally joined Swansea on a free transfer from Marseille back in 2015 scoring 12 goals in 35 appearances in the Premier League, before joining West Ham for £20.5m a season later.

He returned 18 months later in what remains a club-record deal but could not save Swansea from Premier League relegation.

Ayew spent the following season on loan at Fenerbahce, but came back to Swansea in 2019 and has ended the last two campaigns as boss Steve Cooper's leading scorer.

His final appearance for the club came in last Saturday's play-off final defeat by Brentford at Wembley and ended the season as the clubs top scorer with 17 goals.