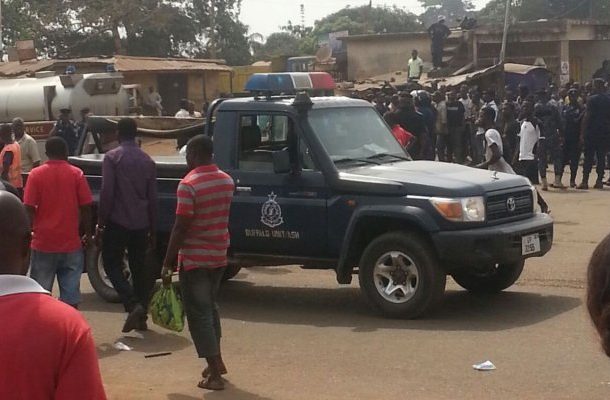 Youth leaders at Tafo in the Ashanti Region has told the Police they are peace-loving people and are ready to relay vital information to law officers to assist in the arrest of persons whose actions may trigger disturbances in the area.Members of the community have resolved to relay vital and sensitive information to enable police arrest persons whose actions may trigger fresh disturbances in the area.“We the people of Tafo should volunteer information to the police and I will urge the media to also report issues accurately. We are ready to cooperate with the police if they are ready to work with us because the information we are going to give to the police must be used,” he stated.Over 150 youth from Tafo in Kumasi on Tuesday August 2 besieged the chief's palace to demand guns for their personal protection.According to them, some youth from the Zongo community in the area had been threatening them and trying to spark fresh conflict.The youth called on Nana Agyen Frimpong II and his elders as well as the security agencies to help resolve the festering disagreement once and for all.The latest move by the youth was in response to an alleged attack on a man the previous weekend by some Zongo youth. The victim was treated at the hospital and discharged later.Tafo Zongo Youth leader Alhaji Abubakar Mahammud, who spoke with Class News in an interview on Thursday August 4, said the police had been able to identify some of the people involved in the attack.“Now we are getting information as the police were saying that they have the names of those people involved and some people have volunteered to lead them to where they can be arrested,” he said.He indicated that recent discussions between the police, community leaders, and the Zongo community youth had been fruitful, as solutions had been proposed to solve the misunderstanding.Source:ClassFMonline.com