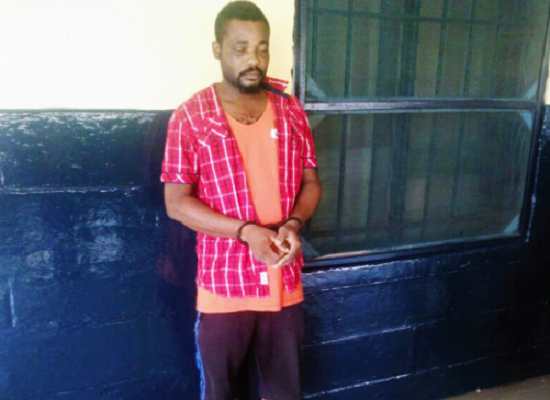 A 40-year-old taxi driver is standing trial at the Accra Circuit Court for allegedly using douche pump (bentoa) to spray a substance suspected to be acid on another taxi driver in a bid to steal the latter’s taxi.

On his first appearance in court last Thursday, Daniel Quaye, who did not have a lawyer, pleaded not guilty to the charge of attempting to commit crime.

He has been remanded and will reappear before the court, presided over by Mr Aboagye Tandoh, on September 15, 2016.

At last Thursday’s hearing of the case, the prosecution presented the tools and other materials allegedly used by Quaye in his alleged bid to steal the taxi.

The items, which were in a plastic bag, were the bentoa, a rope, a knife, a stick and two bottles which contained the liquid suspected to be acid.

Presenting the facts, the prosecutor, Chief Inspector Kwabena Adu, said on August 8, 2016, Quaye chartered a taxi driven by the victim at Tema Community 10 to Korle Bu, for which he was charged GH¢50.

When they got to Korle Bu, he said, Quaye asked the driver to take him to the Nurses Training School for him to take money from his boss to pay the fare.

“On their way, the taxi driver saw that the road was bad and so he slowed down. Immediately Quaye opened a plastic bag he was holding and started spraying a substance suspected to be acid on the driver,’’ he said.

“Quaye also got out of the car, picked a piece of wood and started chasing the taxi driver, shouting ‘thief’, ‘thief’, thief’,’’ he said.

The scene, the prosecutor said, attracted many residents of the area, who arrested the two.

“During questioning, Quaye claimed that the taxi belonged to him and accused the taxi driver of being an armed robber who wanted to snatch his taxi from him.

‘’The taxi driver, however, showed his licence which was in the car to them. Quaye was then handed over to the police,’’ he explained.