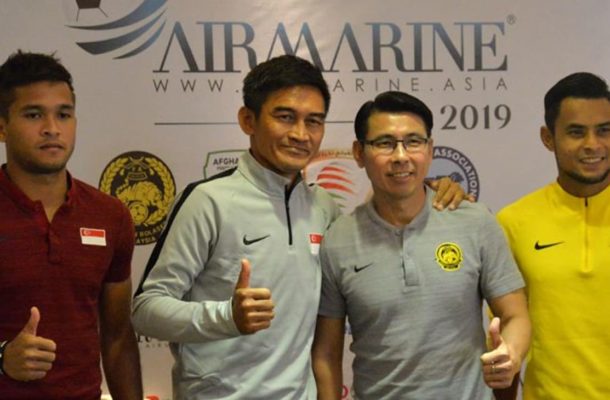 Kuala Lumpur: Malaysia, Singapore, Afghanistan and Oman are out to impress as the four teams compete in the 2019 AIRMARINE Cup which kicks off at the National Stadium on Wednesday.


Hosted by the Football Association of Malaysia, the inaugural friendly tournament will witness Afghanistan take on Oman in the first semi-final match of the night, before Malaysia and Singapore take the stage in a much-awaited Southeast Asian tie.

The tournament serves as the first stepping stone in the teams preparation for the 2022 FIFA World Cup Qualifiers.

For Oman head coach Erwin Koeman, it’s an opportunity to familiarise himself with his squad.

The former Dutch international was appointed to lead the West Asians recently, but that has not swayed him from the target of winning the tournament.

“As you know, I’m the new coach of Oman, for five days now, succeeding Pim Verbeek who did well with the team,” said Koeman.

“For me, the tournament is very important to get to know the players and staff better. To be honest, I don’t know them very well, I’ve seen four games on videos and I’m looking forward to tomorrow.

Afghanistan head coach Anoush Dastgir was oozing with confidence, having been with the team for over a year.

“The match is important, it’s one of the last few matches before the 2022 FIFA World Cup Qualifiers and this team (has been together) for more than one year,” said Dastgir.

“We’ve got the best players from all over the world and we’re looking forward to the match.

“We played against them over a year and a half ago, where we lost 2-0. But it’s different now, they’ve got a new coach, and we’ve got a lot of respect for him as well.

“However, Afghanistan is also stronger than ever, and it will be a nice game tomorrow and we’re eager to bring a good result to win the tournament.”

Posted by Football Association of Malaysia (Official) on Monday, 18 March 2019

Malaysia performed well in the 2018 AFF Cup, finishing runners-up to Vietnam, and head coach Tan Cheng Hoe is aiming to continue their momentum with his new recruits.

“Preparation has been good, training has gotten better, and we’re hoping for a good match tomorrow,” Tan said.

“The players know the way we play. Of course there are newcomers coming in, but we want to keep the same momentum going in. It’s important that the players adapt well to the national playstyle.”

Singapore head coach Nazri Nasir acknowledged the intensity and history of the match, having donned the national jersey for over 14 years, and the 48-year-old coach is now looking to instill the values he has garnered into his team.

“This is my first time taking charge of the team. I take this opportunity as a challenge for me,” Nasir said.

“Most of the players are veterans, who have been in the national team for awhile, it’s just how I want them to play according to my style. I believe the players will give their 100 percent and I trust them.

“There’s a lot of history (playing against Malaysia), even for me as a former player, and this is what I want for my players to have, that mentality of going into the field to do or die. I think we can expect an explosive game tomorrow.”

The final and third-place play-off will be played on Saturday.