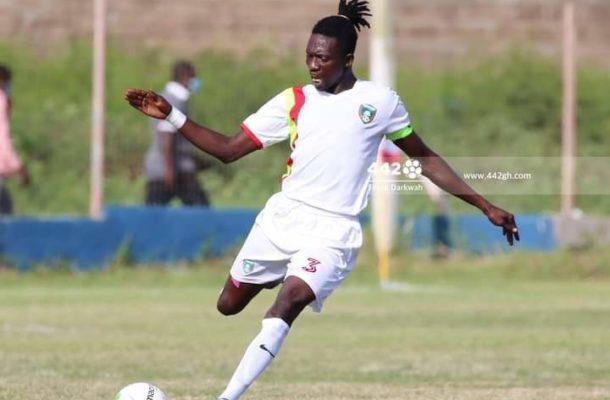 Techiman Eleven Wonders defender Rashid Mohammed has assured the club's fans of grabbing  draw against Accra Hearts  of Oak in their week 9 encounter.

The Techiman  side will play as guest of the Phobians but the enterprising  defender believes they can cause a stare at the Accra Sports stadium  on Sunday.

They are returning to the same pitch for the second time in the nine weeks old league as they had earlier held  Kotoko to a drawn game, a feat tha confident Mohammed feels makes them familiar with the  terrain.

"We have really prepared for Hearts game on Sunday and we are motivated ahead of the game," he said in an interview  with  Kumasi-based Ash FM.

"Drawing against Kotoko earlier has not put pressure on us to win or draw against Hearts of oak.

"It's a different  game  but  not different in the approach to what  we did against Kotoko.

Hearts of Oak in their  last home match annihilated Bechem United  by 6-1 and coach Papic' s side has been boosted  by the return of Midfielder  Emmanuel  Nettey  and the club's joint  leading scorer Kwane Obeng Junior, who both  have missed the action for some weeks.

Playing for the first  time  in front of their expected  teaming fans following  government's decision to allow fans into the stadium, the Phobians  looks favourite  to clinch their 4th win in the league.

But the the Wonders  defender is not perturbed about the Phobian scare.

"Bechem United is different from Techiman Eleven Wonders so they should bear in mind that what they did to Bechem can not be done to us, Mohammed  said.

"Although our leaders owe us that will not de-motivate us from playing against Hearts Of Oak, we are in talks with them and we trust them we will get our money."

The Phobians, after their awat draw with Elimina Sharks, will welcome the Techiman based club at the Accra Sports Stadium on Sunday in matchday 9 encounter.