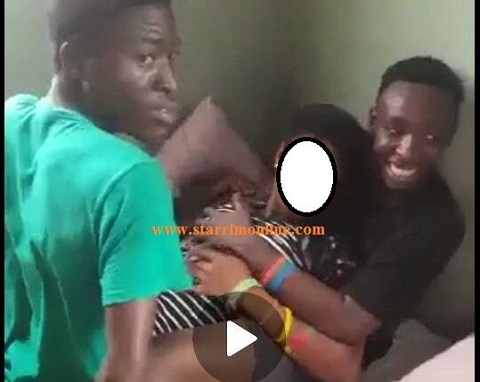 A Whatsapp video of four teenage boys allegedly gang-raping a young girl has sparked outrage on social media with many Ghanaians calling on the security agencies to crack the whip.

The about five minutes video shows an underage girl pinned to a mattress by one of her abusers while his accomplices take turns to perform sexual acts on her.

The victim who was resisting her attackers all-through the ordeal was restrained from escaping by her abusers who appeared to be having fun with the torture.

Outspoken journalist Mabel Aku Baneseh who took to Facebook to express her frustration over the video said: “I’m so anguished. No amount of words can describe my rage. Those young men deserve nothing but death.The law will DEFINITELY catch up with them”.

The development comes in the wake of increased awareness in Ghanaian society on the abuse of women and children.

The alleged rape of a four-year-old girl in the Central region became a national subject with the top police hierarchy promising to ensure justice is served.

On December 7, President Akufo-Addo declared his support for an initiative by the gender ministry to ensure equal rights for women.

“Today, I commit to giving full support to the three-focus area of the HeForShe campaign action platform in Ghana, … and I join millions around the world to stand together to create a bold, visible force for gender equality and say ‘I am a HeForShe,” the President said at the event in Accra.