My terminal report is good, vote for me - Mahama appeals 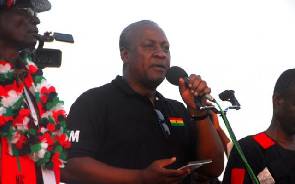 President John Dramani Mahama has been engaging with the chiefs and people of Yendi on the third day of his campaign in the Northern region.

The President has been touting his achievements in roads, upgrade of hospitals and constructions of schools.

He said his government for instance, has improved access to water in the Northern Region from 30 percent to 70 percent.

"In the six cocoa growing regions, we are doing the roads improvement program so many roads that were abandoned for so many years, today we are building those roads," he said.

He appealed to the regent of Dagbon Kampakuya-Na, Abdulai Yakubu Andani, to give him his blessings to win power again and to do more projects for Ghana.

President Mahama likened his work to a student with a good score card, saying, he has shown he his capable of improving the livelihood of Ghanaians.

He spoke about the Constitutional provisional which gives a sitting president another chance to contest for re-election adding both ex-Presidents Jerry Rawlings and John Agyekum Kufuor were all given a second term to govern the country and pleaded with the people to give him same.

"I am sure that if President Mills had survived, we would have added another four years to his. Now it is the turn of your own son, we've finished the four years and we are asking for four more years and I know that with the blessings and prayers you have given me, we will get the four years in addition," he pleaded.

President Mahama explained to the chiefs and people that unreasonable demands threw the budget out of sync in previous election years but promised it will not happen this year.

"We thank God that the labour scene is more stable, aside from that the market fires that were burning have stopped. We are rebuilding most of the markets and we are building them anew," he said.