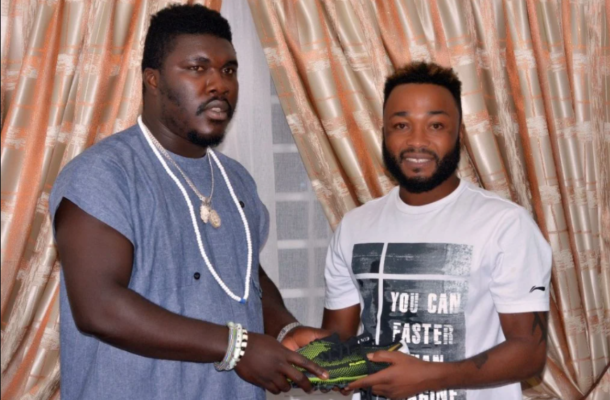 A truce has been called and contract rebel Gladson Awako will in the coming days return to Accra Hearts of Oak to train and play for the rainbow club.

This follows an arbitration brokered by a Ga chief from Teshie,  Teshie Gbugblah Oblahiaaa Mantse (Youth Chief), Original Nii Martey Laryea I where the former Great Olympics player hails from.

The midfield maestro joined the Ghana Premier League champions from rivals Accra Great Olympics barely three months ago but has decided to run away from the club.

Awako has not been training with Hearts for some time now and told the management and board of the club that he can no longer play for Hearts.

According to reports, the player has never known peace since signing for Hearts of Oak and has been under constant spiritual attacks and cannot even sleep.

Although the midfielder has never come out to state reasons why he has decided to abandon the contract he signed with Hearts of Oak some months ago.

"Awako is from Teshie so I decided to inspire him to join his colleagues at training so that he can continue his football career. We all know Accra Hearts of Oak is one of the biggest football club on the African continent," the traditional leader said.

The chief on behalf of the player apologized to the Hearts of Oak board chairman Togbe Afede XIV for his untoward behaviour.

"Awako is coming to help the team win more trophies so we should all support him to deliver. I know he will do more beyond the limit and also help the team to defend the league title".

The player too had some kind words for the Ga chief and apologized to the Hearts fraternity for his truancy.

"I want to say a very big thank you to my Father Nii Martey Laryea I for his counsel and the kits he has given me to start training. I would like to urge all the Hearts of Oak fans to put everything behind them and support me to succeed in my coming back as a player of the team".