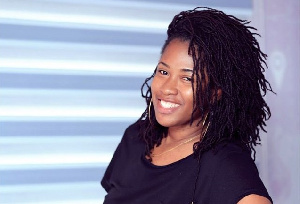 On a humid Wednesday afternoon, I found myself in a space having lunch and initiating a rather unusual conversation with a lady I mostly engage with regards to promotional mechanics of what has become one of the most exciting and watched programmes on Ghanaian television in recent times, Date Rush season three.

Ayerkie Narnor and I are colleagues at the Media General Group, Ghana’s leading Media Company which owns and operates some of the industry’s leading platforms. She works with Adesa Productions Limited, the subsidiary which specialises in audiovisual production and served as the Producer of season three of the popular television reality show, Date Rush season three.

How best do I describe Ayerkie? She is a young pan-Africanist to the core and a non-conformist passionate about championing the cause of people of African descent. Ayerki is bold, firm, assertive, and brutally honest about issues about the black race and humanity in general.

We both acknowledged the fact that we are indeed in interesting times considering developments around the world in recent times, from the devastating effect of the novel coronavirus on businesses and livelihoods of persons around the world with black people also being affected per available data.

Ayerkie has been following with keen interest the nationwide unrest over racial injustice across the United States of America and several calls by prominent people and protesters around the world for reforms to curtail injustice perpetuated against blacks triggered by the death of 46-year-old African American, George Floyd, in Minneapolis, Minnesota, whilst in police custody.

“Our brothers and sisters in the diaspora joined by others have risen and demonstrated in thousands regardless of Covid-19 over the gruesome murder of George Floyd, in fact, there are numerous shootings and killing of blacks in America in broad daylight by police officers with the perpetrators are never found or apprehended. So this singular activity is sending a very strong message of how black people have been suppressed, denied their dignity, and their right to live in a supposed free world for everybody. How is this possible”, Ayerkie wondered.

This brought us to the subject of identity - the fact of being who you are and taking into consideration your qualities, beliefs, personality, looks, or expressions that make a person. Ayerkie expressed her frustration with the Ghanaian media for not giving enough coverage to the matter to create some level of sensitization on the matter of racism and what the world was calling for.

“Surprisingly, our local media said very little to nothing about what the death of George Floyd had triggered worldwide. That is not our issue, rather an American problem and that of the rest of the world, I supposed. Well, Kofi Adu-Brempong, a Ghanaian Ph.D. student at the University of Florida was shot in the chest and face for being Black and I’m wondering how many Ghanaians are even aware and what is being done to seek for justice”, she added.

Commending the government for holding a memorial ceremony in honour of George Floyd amidst fierce resistance, Ayerkie indicated that the problems of Africans anywhere in the world should certainly be a problem for Africans everywhere on the surface of the earth. Citing the brutalizing of three Kenyan students and two diplomats from Uganda by the New York police she advocated for a united front for black people across the globe.

Basically, the media is described as performing three functions which are information, education, and entertainment. Referred to as the Fourth Estate or fourth power, the media possess the capacity of advocacy and implicit ability to frame political issues. Though it is not formally recognized as a part of a political system, it wields significant indirect social influence. Beyond this, the media leads to the formation of attitude through establishing values for the society or nation and thereby building a climate of change in the society and nation at large.

Ayerkie charges the media and young people to hold our leaders accountable not only for the promises they make on the political platform but also to scrutinize their actions, policies and get them to account for whatever they do.

“I am sometimes amazed at the silence of the media when it comes to holding our leaders accountable on several issues including that of the black race. Continental Africans are being maltreated and stigmatized as being the carriers of COVID-19 in China and what have our leaders done? Beyond just reporting it, what is the media also doing”?

As Kwame Nkrumah said, this modern form of mental slavery is worse than the physical form of slavery. How long are we going to look on as continental Africans are being slaughtered and having their bodies and organs sold in some Arab countries?