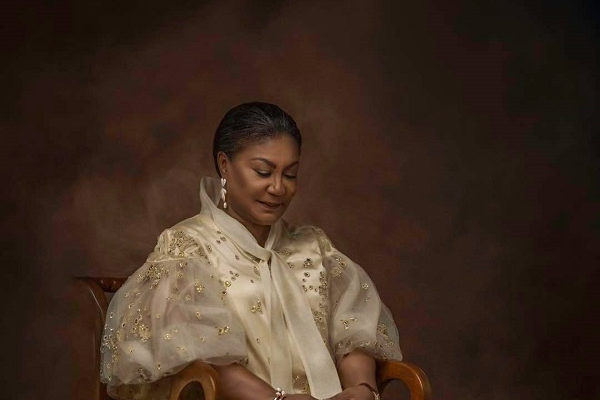 The First Lady of the Republic of Ghana, Mrs Rebecca Akufo-Addo yesterday, March 12, 2021, turned 70 and she has got most internet users talking about her.

Seated as the Queen she is, with her eyes gazed at the floor, Mrs Rebecca Akufo-Addo is gorgeously adorned in a 31 3D gold lace gown.

The dress has caused a stir not simply because of its elegance but also because of the reassuring details the designer gave to the full-length dress.

The photo uploaded on the official Facebook page of the First Lady about 6 hours ago has generated over 22K reactions, 1.8K comments and 540 shares.

"Thank you so much for the well wishes yesterday. It made my day so much brighter. It was so humbling reading the messages and the beautiful words of prayer. Thank you. May God bless you all," she captioned the photo.

She is a founding member and chairperson of charity group Infanta Malaria Prevention Foundation founded in 2005 to support the national effort to reduce malaria infections in infants and young children.

Mrs Akufo-Addo was installed as the Development Queen mother of the Ada Traditional Area at the 82nd-anniversary celebration of the Asafotufiami festival in August 2019 and is known by the stool name Naana Ode Opeor Kabukie.