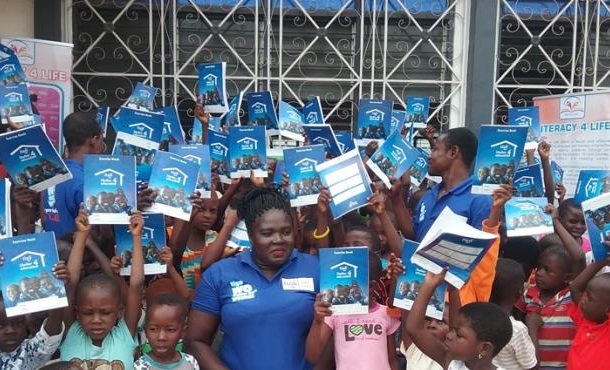 Children in rural communities in the Greater Accra Region continue to benefit from reading camps organised by the 2014 co-winner of Tigo Ghana Digital Change-maker competition, Sheila Osei-Boakye. Last week, Sheila’s organisation ‘Literacy 4 Life’ took over 350 children in the Mobole community near Afienya through basic reading lessons at a two-day reading camp. In collaboration with the Tema Lions Club, they also organised eye screening for 200 of the participants out of which 85 children were diagnosed with chronic visual impairment. The students were put in groups according to capabilities after which they were taken through phonetics, phonemic, phonological awareness, pronunciation of words and word formation. At the end of the day two programme, Literacy 4 Life noted that over 85 percent of the children present could not read due to factors such as visual impairment, hearing impairment, intellectual and speech impairment and this was largely contributing to their poor performance in school. Others could not read due to a poor foundation in literacy. Before its maiden edition in August 2015, the Literacy 4 Life project planned to reach 2,000 children in Afienya, Apollonia, Ashaiman Otchebleku and Mobole; all rural communities in the Greater Accra Region by August 2016. It succeeded in visiting all five communities and exceeded its target by reaching a total of 2, 692 children. Sheila explained that the reading camps are organised to complement teachers’ efforts by helping to train the children to become proficient readers and writers. She said her organisation seeks to promote access to quality basic education for children; build capacity and skills training for youth and women, and promote healthy living through medical outreach and education in sexual reproductive health. The next stop for the Literacy 4 Life reading camp is the Volta Region source:modernghana.com