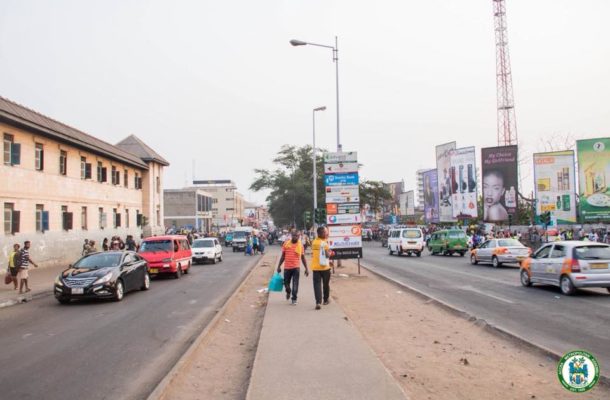 Hundreds of traders undertaking business activities in the median of the Kwame Nkrumah Avenue Street in the Central Business District of Accra have been moved from the area by the Greater Accra Regional Minister, Henry Quartey.

The Minister gave the order when he visited the place on Friday together with police and officials from the Forestry Commission.

He said the move is to allow authorities to replant some trees removed from the median of the street to be replanted.

Mr. Quartey explained that “the original architectural design was not meant for people to sell or stores to be built here”.

However, “people have now encroached onto the principal or main streets of the Kwame Nkrumah Avenue [to sell]. We have spoken to the traders on several occasions to move into the market because we are told by the market queens that although there are spaces in the market, quite a number of traders have refused to move in there but in the last two weeks my attention was drawn to some structures springing up in the middle of the main streets”, he added.


The Regional Minister said that the relocation of the traders is “not [being done in] a Rambo style or abayee-like style. What is wrong, is wrong. The wrongs must be corrected…for Accra to work.”

The tree planting will take place “next week God willing. We are going to put the black soil here and plant the trees here”, he assured.

He debunked assertions that city authorities have been authorized to allocate the places within the median to other people.

On the cutting down of trees in Accra Central and siting of containers, the Member of Parliament for the Odododiodoo constituency, Edwin Nii Lante Vanderpuye at a press conference on Wednesday issued a one-week ultimatum to government to stop persons indiscriminately erecting containers in the capital from doing so.

According to the MP, authorities have resorted to the mounting of containers in the median of streets and other ceremonial parts of the city some of which he said includes Opera Square.