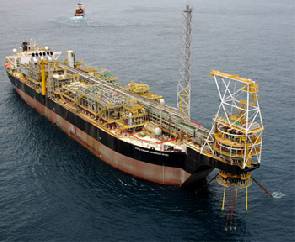 Insurance will cover the loss of production and claims regarding the interruption of business at one of West Africa's biggest oil fields, Tullow Oil has said.

Tullow, which has offices in London, said its insurance covers the interruption of business at the Jubilee oil field in Ghana.

Tullow last year sent development plans for the offshore Jubilee field to the Ghanaian government. Earlier this year, the company said part of the Kwame Nkrumah Floating Production Storage and Offloading facility positioned off the Ghanaian coast was damaged and no longer functioning as designed.

However, Tullow's insurance coverage already extends to cover the costs associated with the equipment failure.

"Cover includes production losses at the Jubilee field associated with the failure of the bearing and the downtime associated with for the work program to re-establish normal operations," the company said in a statement issued today.

Oil and natural production continued after the equipment failure, but Tullow was forced to revise its operational procedures.

The company was forecasting a 2016 average production rate at Jubilee at around 101,000 barrels of oil equivalent per day. In its half-year financial report from July, the company said it expected production from Jubilee to come in at around 15 percent below initial expectations.

Tullow said it didn't expect the issue at Jubilee to have a material impact on revenue. It recorded a $30 million profit for the first half of 2016, following a loss last year of $68 million, noting pressure from lower crude oil prices and reduced output from its Jubilee oil field were offset by lower costs elsewhere in its portfolio.

Tullow Oil is pleased to announce that it has received confirmation from its Lead Insurers that they accept there is a recoverable claim with respect to the Group’s corporate policy for Business Interruption insurance following damage to the Jubilee turret bearing earlier this year. This follows Tullow’s announcement on 23 September 2016 that Hull & Machinery cover for Jubilee has also been confirmed.

The Business Interruption policy, which is procured for Tullow’s interest in its major producing assets, covers loss of revenues as a result of production outages. Cover includes production losses at the Jubilee Field associated with the failure of the bearing and the downtime associated with the work programme to re-establish normal operations. Tullow will continue to work closely with the loss adjusters and insurers to establish an efficient payments schedule as remedial work continues. Tullow will provide an update on the progress of this project in its next Trading Statement on 9 November 2016.