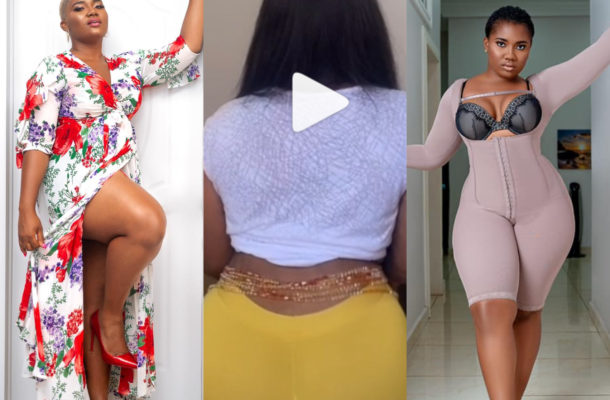 She gained notoriety whiles a student of the University of Cape Coast (UCC) for going wild and releasing bedroom pictures of her nude self.

Abena Korkor as she is referred to later blamed her taste for going nude and sharing them on social media on a mental disorder called bipolar.

In recent times she has become an advocate for mental health and a TV host with Media General as a co host of Ladies Circle.

A Nigerian adage says the rain can never wash off the spots of a leopard and perhaps rightly so as not long ago Abena Korkor shared lingerie videos of herself in her full glory on her Instagram page.

In one of her post on Instagram she added “I don’t intend to fit in a category. A lady does not do this. You’re a role model don’t do this. I am proud of who I am, living my authentic self. And I will attract my tribe that will let me live out my full potential.”

After a lot of backlash from her fans on Instagram, she dropped another message saying she is no loonger a TV presenter.

“may I lose it all but not myself” and announced that “I am no longer a TV presenter, in fact, I don’t fit the script and I don’t think I ever will.”

She later shared a video on her Instagram weeping with Omah Lay’s verse on Gyakie’s ‘Forever’ as her them song in an emotional outpour about her being sacked from TV3.


“I got a call from work that my show has been put on hold.” She says per her contract, she was supposed to get 2 weeks’ notice before her contract can be terminated but she feels this is coming impromptu because of her lingerie post.

TV3 is yet to release any official statement on the conduct and status of Abena Korkor.