U20 WC: Black Princesses arrive in France for international showpiece 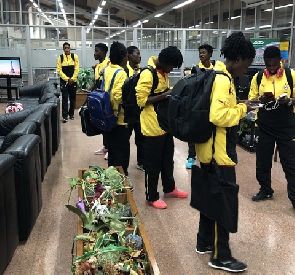 Ghana’s Black Princesses touched down in France on Wednesday for the FIFA U20 Women’s World Cup.

The players, technical team members and some staff of the Youth and Sports Ministry were received by reps from FIFA upon arrival.

The team will continue with their preparations in Britanny ahead of their opener against host France on Sunday.

The Black Princesses were expected to embark on a training tour in Spain last week but it was cancelled following difficulties in acquiring visas for some players.

However, Coach Basigi, who released his 21 member squad for the Championship last week is confident with the preparations of the team so far.

The team will miss forward Princella Adubea due to injury but captain Rafia Alhassan and her charges are poised to make history in France by progressing from the group stages.

The Black Princesses are in group A together with France, the Netherlands and New Zealand.

Modja 3 years ago
Why they all feel the need to be on the cell phone. The look stupid doing that.