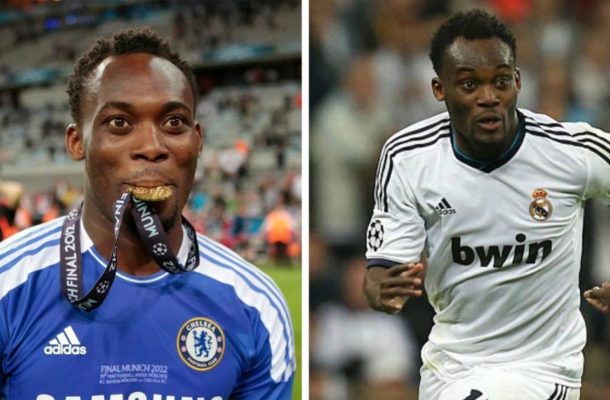 Legendary Ghana midfielder Michael Essien has sent his well wishes to his former clubs Chelsea and Real Madrid ahead of their Uefa Champions League semi final clash on Tuesday night.

The central midfielder spent the bulk of his career playing for Chelsea where he spent nine season with the London giants winning two English Premier League titles several domestic cups and the UEFA Champions League trophy in 2012.

Essien was part of the historic Chelsea squad that lifted the UEFA Champions League trophy for the first time in 2012 in Munich although he did not play a single minute in the finals.

He briefly left Chelsea for a brief loan spell at Chelsea in the summer of 2012 to join his 'daddy' Mourinho at Real Madrid.

The combative midfielder played 35 matches at Madrid scoring twice in his brief loan spell with the Los Blancos.

With his two former sides set to play this evening in the UEFA Champions League, the 38 year old midfielder has wished his sides well as they clash at the Estadio Alfredo di Stefano.

In a post on his page, it read  "Wishing both teams the best of luck in tonight's game"