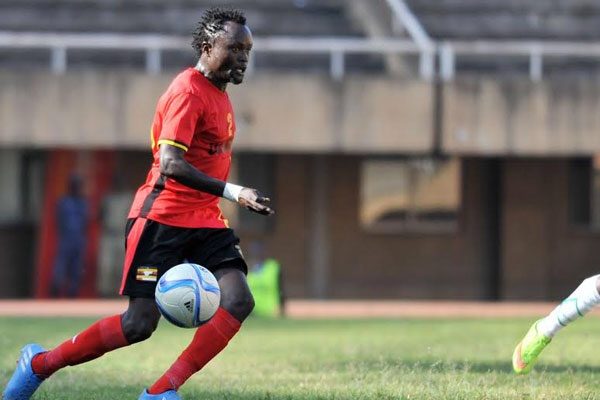 Wadada remains a subject of debate as many think the Sudanese referee El Fadil Mohammed errored in not sending him off in the group E 2018 World Cup qualifying opener.

“In the first half, the referee just warned me verbally with the card in his fingers,” Wadada recalled when had brought down Afriyie Acquah in the 24th minute.

During that incident, it appeared like El Fadil realised he only had a red card in his pack, then instead flashed an empty hand and noted down in his book. Teammate Moses Oloya is seen complaining to the referee about the supposed booking.

The commentator, veteran African football journalist Mark Gleeson even joked that “the referee hasn’t carried a yellow card in his collection” for this game.

To the rest of the world, Wadada had entered the referee’s book.  between the two, it was only a verbal caution as we found out later in the second half.

“So after fouling (Frank) Acheampong (on 56 minutes), I knew it was yellow,” Wadada said. “Even some of my teammates thought I was heading to the tunnel but I knew I was safe.” he added.

Gleeson, like almost everyone, was stunned that Mohammed didn’t pull out a red card after all Wadada stood still like a death convict whose hangman appointment has been delayed slightly.

His coach Micho Sredojevic saw this as a lifeline. The Serbian introduced Geoffrey Massa for midfielder Tonny Mawejje while ‘survivor’ Wadada paved way for Hassan Wasswa.