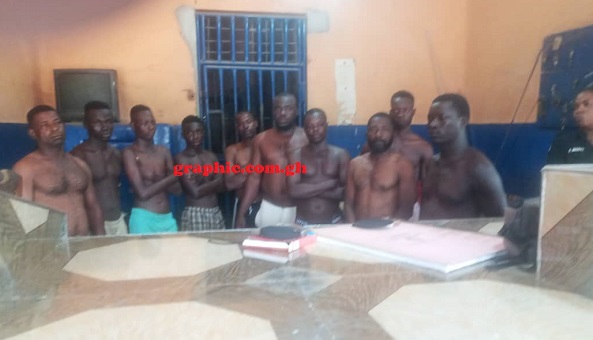 The Upper East Regional Police Command on Saturday (July 24, 2021) arrested 34 suspects in a dawn swoop on the Zebilla and Tilli forest areas as part of measures to deal with the increasing spate of armed robberies and other security threats on the Bolgatanga-Bawku highway.

Out of the 34 suspects, two of them have been identified as part of a gang of five suspected armed robbers who are on the police wanted list in the region.

The police subsequently retrieved one gold detector and three motorbikes suspected to have been stolen from their respective owners. Other items found on the suspects included; knives, a pair of scissors, some leaves suspected to be Indian hemp wrapped in plastic bags and some mobile phones.

A statement signed by the Public Affairs Officer of the Regional Police Command, Assistant Superintendent of Police (ASP), Mr David Fianko-Okyere stated that the modus operandi of the suspected armed robbers based on intelligence by the Special Surveillance team suggests that they allegedly operate under the guise of shepherding their cattle by pushing them (the cattle) across the Bolgatanga-Bawku road and when motorists stop, then they use the opportunity to rob their victims at gunpoint.

They are believed to be herdsmen from nearby towns and villages along that stretch of road who perpetrate that crime.

The statement further assured the public particularly commuters on the Bolgatanga-Bawku highway of enhanced security strategy including 24-hour robust patrols, snap checkpoints for routine stop and search exercises as well as swoops on suspected criminals in the areas to ensure maximum security.

It called for greater cooperation from the public by way of providing police with information on the activities of criminals in the communities to prevent crime.

“Anyone with information on any criminal or a group should report to the nearest police station or personnel including other security services or call police on emergency numbers 181,18555, 112 or call the Upper East Regional Police operations room numbers 0299204666 for quick police response," the statement added.

Meanwhile, screening of the suspects is ongoing to facilitate further investigations.