US Congress in turmoil as pro-Trump supporters breach building 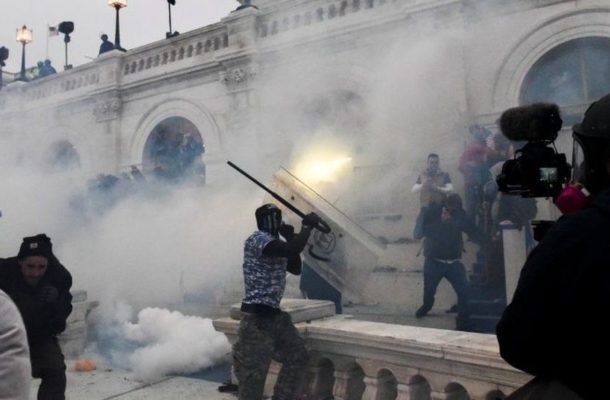 In dramatic scenes, demonstrators swarmed the building as Congress members were escorted out by police.

Mr Biden said it was an “insurrection”, and Mr Trump released a video message asking supporters to go home.

The joint session of Congress certifying Mr Biden’s win has been suspended and forced into recess.

There are reports of guns drawn in the building and at least one person shot. A woman was reported to be in a critical condition and several police were injured.

There has been an armed confrontation at the doors of the House of Representatives. Tear gas has also been used.

Rioters were seen marching through the building chanting “We want Trump” and one was photographed in the Senate president’s chair.

Washington police said it was clear the crowd was intent on using chemical irritants to force entry to the building.

The latest reports say the steps of the Capitol have now been cleared.

Mr Trump recorded a video message on Twitter calling on supporters to leave the Capitol, but continuing to make unsubstantiated claims that Democrats had stolen the election.

“I know your pain, I know you’re hurt,” he said. “You have to go home now, we have to have peace… we don’t want anybody hurt.”

Mr Biden said the demonstration “borders on sedition and it must end now”.

“At this hour our democracy is under unprecedented assault,” he said.

Mr Trump’s spokeswoman, Kayleigh McEnany, tweeted that the National Guard was being deployed.