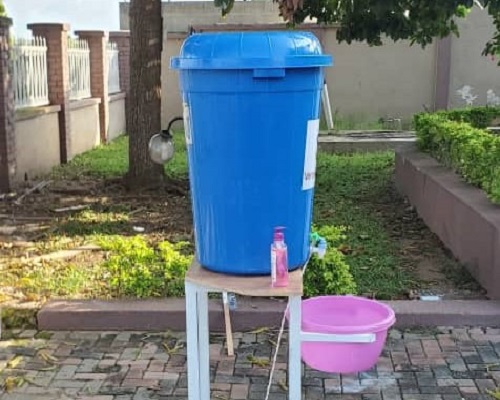 Madam Veronica Bekoe, the inventor of the ingenious Veronica Bucket, has outdoored a new and improved version of the bucket in a bid to further help curb the spread of COVID-19.

The new invention, a build-up of the old, was designed by Dext Technology Limited, manufacturers of The Science Set and uses the pedal system.

In a short ceremony in Accra to unveil the upgraded bucket, Madam Bekoe related that a while back, she met a 10-year-old girl who uses the science set, was fascinated about it, and became interested in meeting the producers of what is nicknamed “project-based learning in a box”.

Madam Bekoe continued that it was after she met with the Dext team that they concluded on making an improved version of the Veronica Bucket, which will not require the user to touch the tap but use his or her foot to press down on a pedal to enable water flow for handwashing.


According to the retired biological scientist, she insisted that the revised version be made without compromising on its affordability and the ease with which other artisans could readily access materials used in its recreation.

While congratulating Madam Bekoe and the Dext team for their inventiveness, a representative from the Ministry of Health, entreated Ghanaians to embrace the new invention to help further minimize the spread of the COVID-19.

Speaking with the Chief Executive Officer of Dext Technology, Charles Ofori Antipem, after the launch, he mentioned that the company was honored to have had the privilege of working with the legendary Madam Bekoe.

He added that together, they have authored comprehensive academic content which is to help students, build their shand washing system using the science set, as a means to stop the potential spread of the COVID-19.