Victory for Nana Addo will be ‘very dangerous’ for Ghana – Mahama 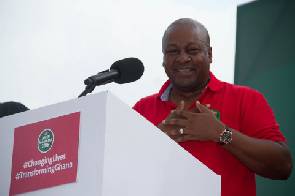 The National Democratic Congress (NDC) flagbearer, President John Mahama has warned it would be “very dangerous” to hand over power to the opposition New Patriotic Party (NPP) flagbearer, Nana Akufo Addo, because he presides over a divided party.

In President Mahama’s latest swipe at the NPP presidential nominee, he likened Nana Addo to a dictator who cannot stand criticism from his own party.

Speaking at Bimbilla on his four-day campaign tour of the Northern region, he said, “It will be a very dangerous thing to hand power to a party that is not ready because the NPP party, as I tell you today, is divided into two.”

Nana Addo is leading “only half of the party” according to President Mahama who added that “the other half are sitting with their hands folded watching him drive the bus down the hill.”

“What we need in Ghana is an understanding President. The era of dictatorship is gone. We are not looking for dictator, somebody who can’t stand criticism. Within his own party, if you criticize him he will sack you. We are looking for a leader who can bring people together,” the NDC flagbearer added.

NDC and its flagbearer have in recent times fallen on tagging the NPP as a party intolerant of dissenting views.

During the NDC’s official campaign launch, President Mahama accused the NPP of unnecessarily punishing its members who speak against issues within the party, in reference to the suspended NPP Chair, Paul Afoko.

But the NPP responded to these claims in reference to Paul Afoko saying its firm and constitutional handling of the recent internal suspensions, is instead an indication of the party’s ability to govern.