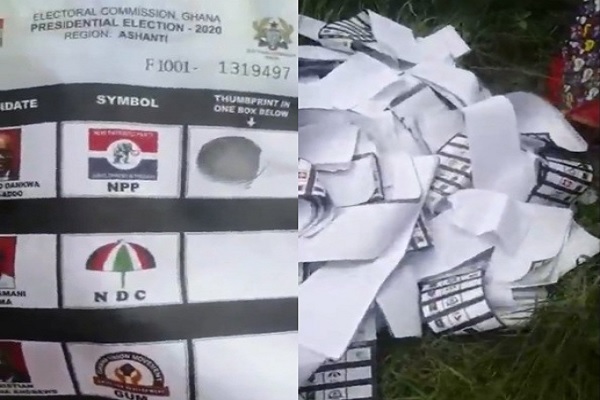 The video is in circulation on social media

Thousands of thumbprinted ballot papers have been thrown out after unsuccessful attempts to get them stuffed into ballot boxes to rig the 2020 elections.

Social media users have been sharing the video that shows thousands of the papers thumbprinted in Nana Addo's favour to rig the election held on 7th December.

It comes amid growing concerns over the credibility of the polls, which the Electoral Commission has already called it for the ruling NPP.

The NDC has made repeated and claims of widespread voter fraud and erroneous tabulation by the EC.

Prior to the election, the NDC had alleged the NPP and the EC had connived to ballot-stuff and were able to identify some printing houses who were in charge of the printing.

The discarded ballot papers had the stamps of the EC, which suggests the connivance of the NPP and the EC to subvert the will of the people.