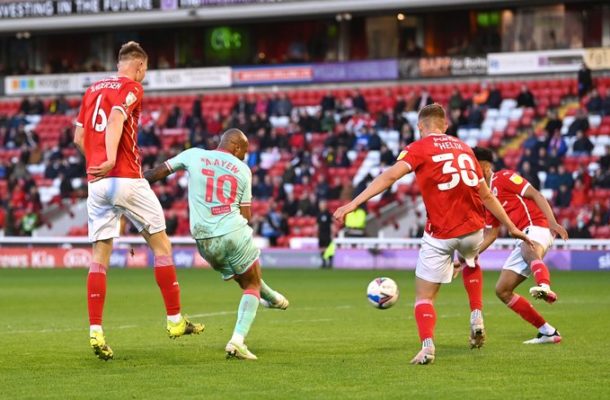 Swansea City's talisman Andre Ayew gave his side a slender 1-0 victory in their play off first leg match against Barnsley.

The home side Barnsley controlled possesion and caused the Swans all sorts of troubles but they stood firm before with six minutes to end the first half Andre Ayew scored against the run of play with a sumptuous strike.

Kyle Naughton played a fine pass down the Swans' right, into Ayew's feet.

The Ghana forward then turned on to his left foot just inside the penalty area and curled a brilliant shot into the far corner.
Barnsley started the second half on the front foot and Romal Palmer tried to find Callum Brittain with a through ball but, despite Brittain's sliding effort, the ball went out for a goal kick.

The home side were far more threatening in the second half and saw Cauley Woodrow, Carlton Morris and Callum Brittain all have efforts while Jamal Lowe came the closest to adding a second for Swansea.

But Swansea kept a clean sheet to ensure they have the advantage at the midway point of the two-legged affair which culminates at the Liberty Stadium on Saturday evening.

With 10 minutes left on the clock, Routledge went down in the Barnsley box under a challenge from Helik, although referee Geoff Eltringham did not feel the incident warranted a penalty.

Ayew then had an effort blocked before Collins eventually dealt with Grimes' rasping strike in the final stages.

Barnsley hit the bar in injury time, but Swansea saw out the final stages to take a slender advantage into the second leg, with kick-off at the Liberty taking place at 6:30pm on Saturday.