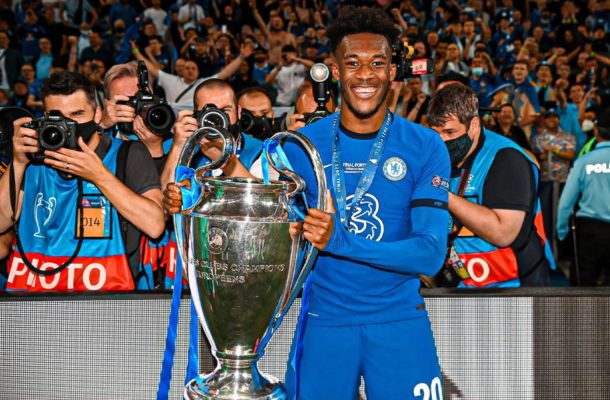 Chelsea youngster Callum Hudson-Odoi has touched down in Ghana after the season ended with him lifting the UEFA Champions League trophy last Saturday against Manchester City at the Estadio de Dragao.

The 20 year old winger was an unused substitute as Chelsea lifted its second Champions League trophy.

After being overlooked by England manager Gareth Southgate for the Euro 2020 tournament which kicks off next week the England-born with Ghanaian parents is back home in Ghana for holidays and was met on arrival by Ghanaian musician and close friend King Promise.

Hudson-Odoi was born and raised in Wandsworth, Greater London and is the younger brother of non-League striker Bradley Hudson-Odoi and the second son of former Hearts of Oak Ghanaian midfielder Bismark Odoi.

He was called up by the England under-21 team for the first time in March 2019.

A few days later, following injury to some of the senior squad players, he was called up to Gareth Southgate's senior squad for UEFA Euro 2020 qualifiers against Czech Republic and Montenegro.

Upon receiving his maiden call-up, Hudson-Odoi said he was "shocked" and described it as "a dream come true".

He made his debut on 22 March as a 70th-minute substitute in a 5–0 win over the Czech Republic at Wembley Stadium.

Upon doing so, he became the youngest-ever player to make his debut in a competitive match for England, aged 18 years and 135 days, breaking the record set by Duncan Edwards in 1955 by 40 days.

The winger made 23 appearances for Chelsea in the Premier League scoring twice and providing three assists.